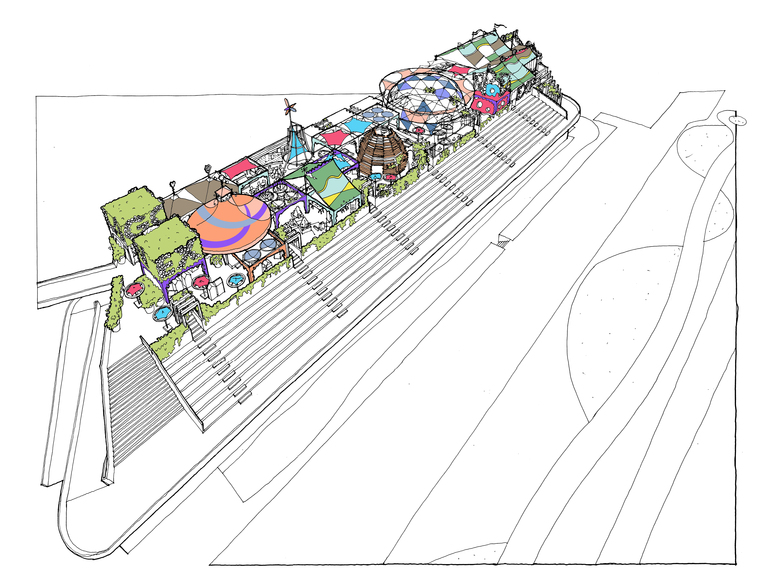 The Rio de Janeiro Entertainment Complex & Children’s Museum Project, a 2000 square meter children’s entertainment and exploration-based complex was designed as a transformative measure to reclaim the unused rooftop above the bleachers of the highly visible, yet seldom used Lagoa Rodrigo de Freitas Rowing Stadium. Taking full advantage of the cultural habit of being outdoors all year round; this family-friendly complex was designed as a living green canopy in which distinct lands of discovery and creativity would flow.

The design crossed entertainment, education and socio-economic boundaries through the creation of a memorable, meaningful place. This project created a destination akin to a club that everyone could afford and belong to, one supporting citizenship and educational curricula. Under a soaring cone-like structure inspired by local architecture, children would make art, build, and engineer; under a cirque-like tent, children would perform or engage in magic, song, and dress-up. At the geodesic climbing dome defining the football pitch, children would find physical adventure and exercises in teamwork; under the eco-tent made of recycled railroad ties, children would sail boats at a mini lagoon, explore wind turbines and solar energy, power up game toys and telephones, recycle and reuse. In an Olympic twist of fate, the city’s winning bid reinstated the need for the stadium’s original use displacing the complex. The project’s successful design and programming helped shift it from being a supportive element into being an anchor of development envisioned as a totally new project with the same pedagogically-based and culturally relevant emphasis as a destination of play and learning.

Altres projectes per Architecture Is Fun