Founded in 1989 by Hani Rashid & Lise Anne Couture, New York city based Asymptote Architecture is a leading international architecture practice that has distinguished itself globally with intelligent, innovative and  visionary projects  that include building designs, master planning projects art installations, virtual reality environments as well as interiors and industrial design.

​Asymptote's approach to utilizing digital tools and technologies, contemporary theory, innovative building practices and advancements in engineering solutions and environmental sustainability have afforded the practice a broad and powerful perspective on all aspects related to architectural building design and city planning.

Asymptote Architecture has received numerous prestigious awards including the AIA NY chapter award, Middle Eastern Architecture Awards and Le Grand Prix de l’Architecture in Paris, as well as received significant awards for achievement within the discipline such as the 2004 Frederic Keisler Prize in recognition of their exceptional contributions to the progress and merging of art and architecture.

The work of Asymptote is part of a number of  private and museum collections including the Museum of Modern Art in New York,  the Netherlands Institute of Architecture (NAI), the Pinakothek der Moderne in Munich, the San Francisco Museum of Modern Art, the Centre Pompidou in Paris, the Frac Centre in Orléans, France  and the Solomon R. Guggenheim Museum New York. The practices work has been the subject of 3 monographs and is widely published internationally in professional journals as well as the general press. 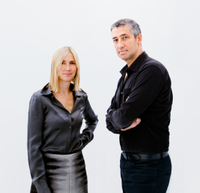