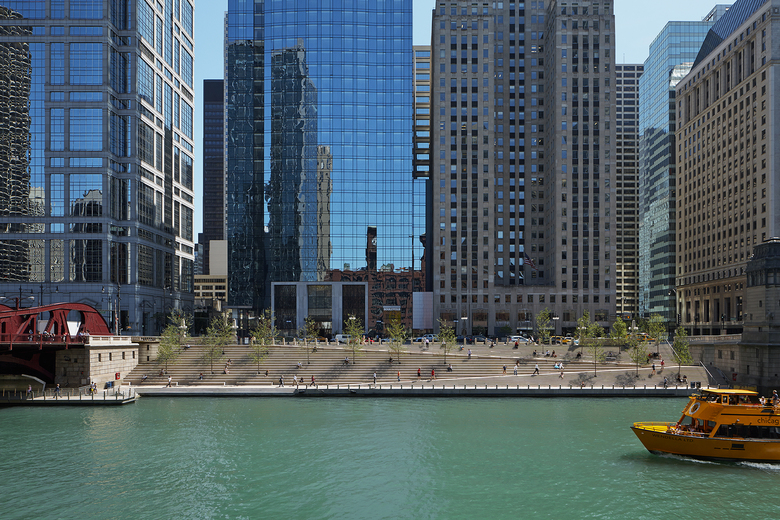 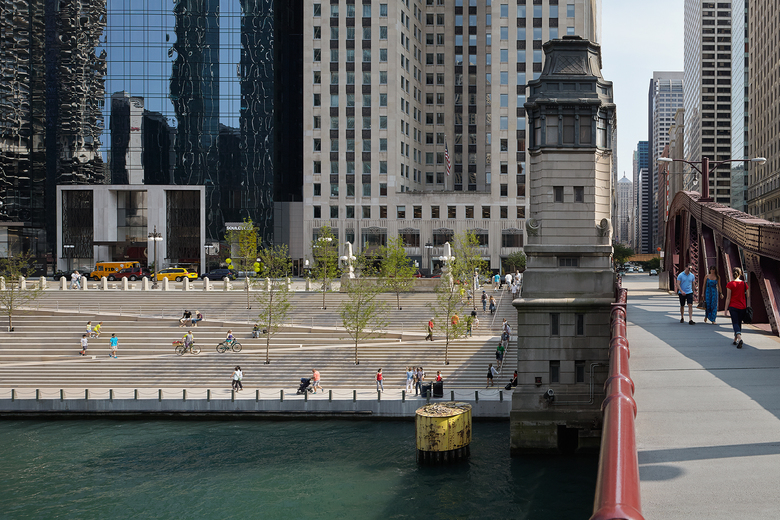 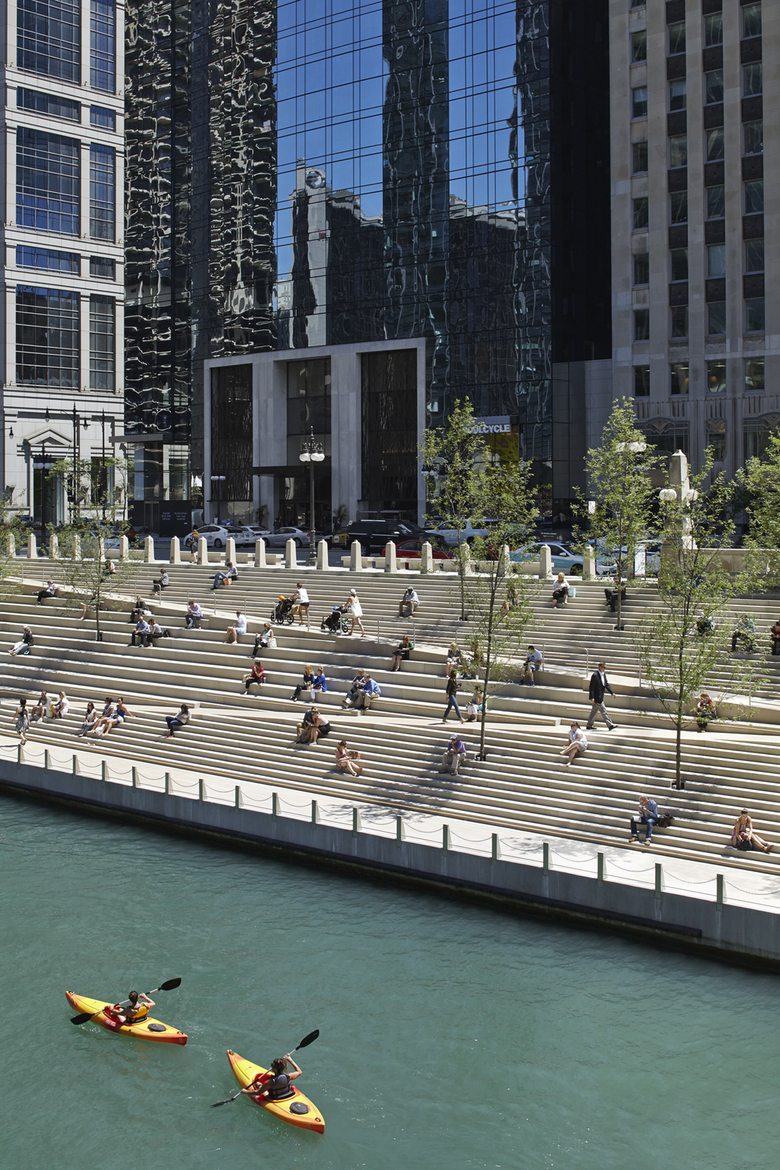 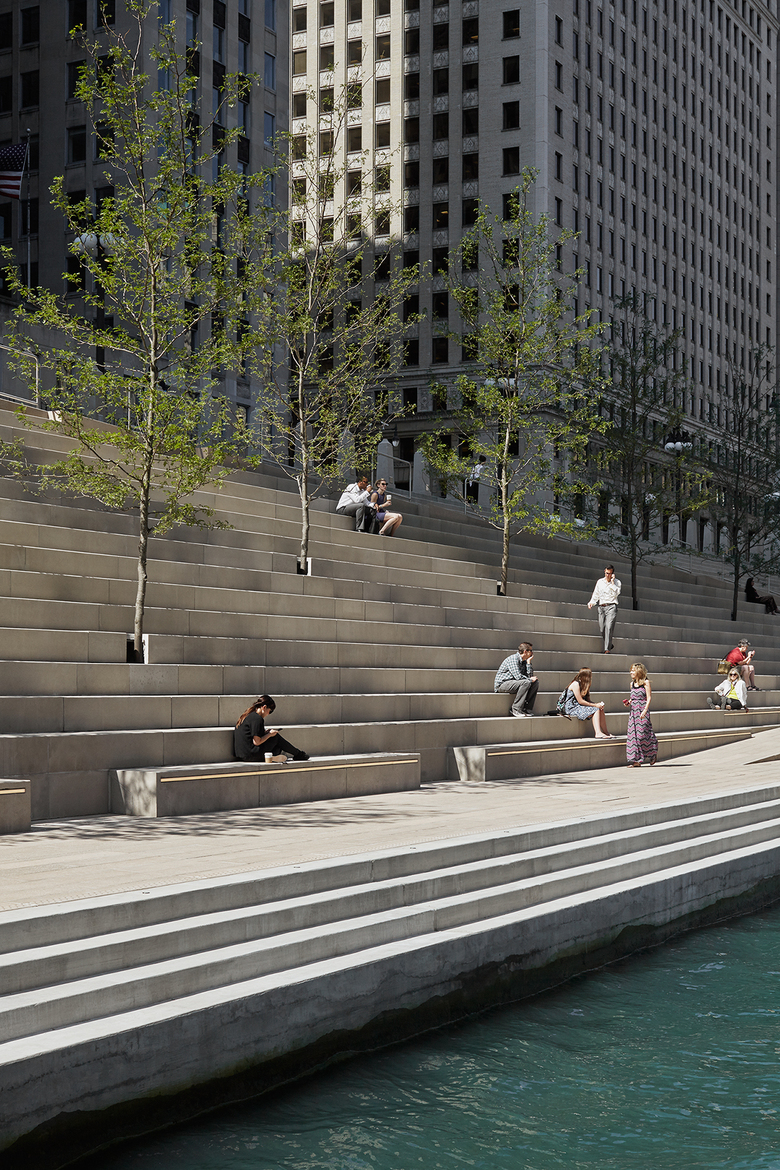 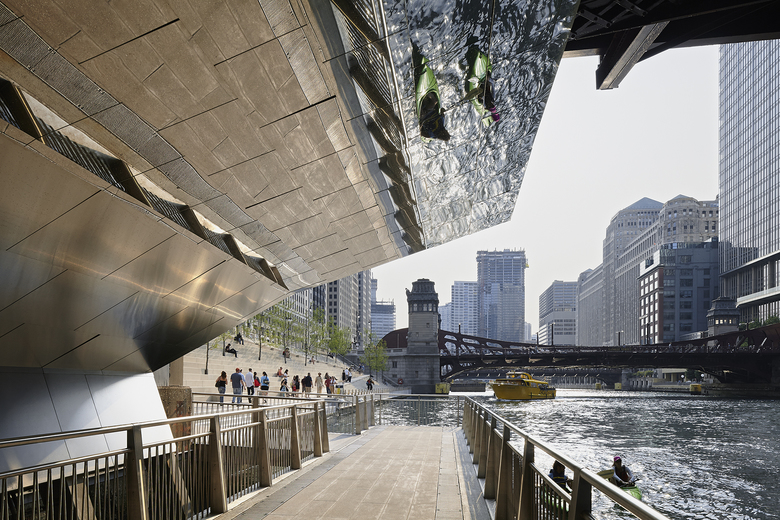 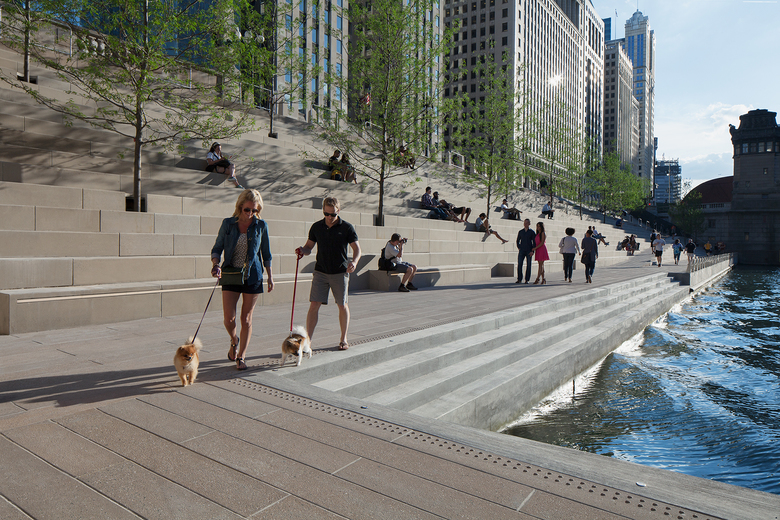 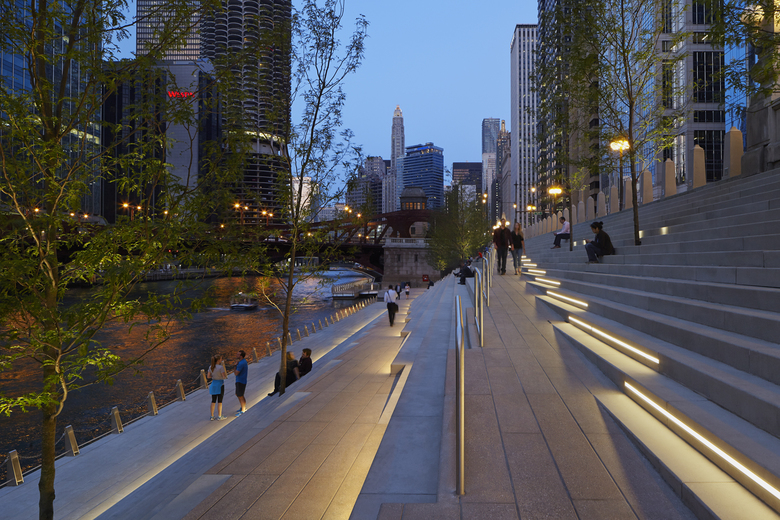 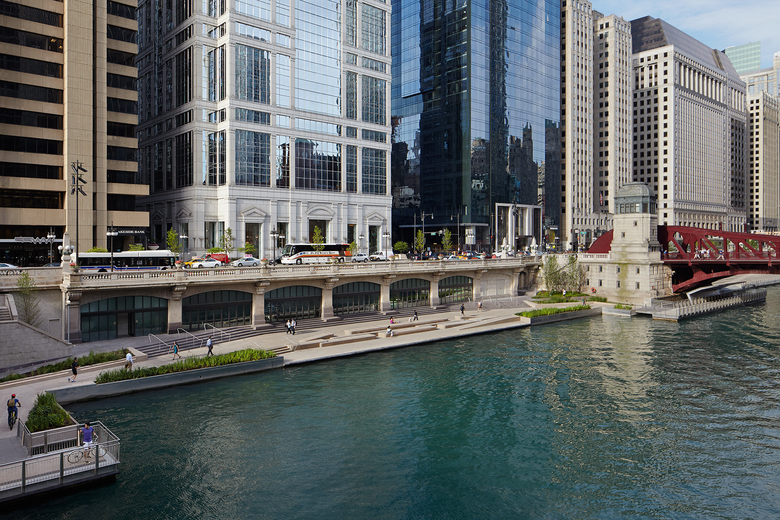 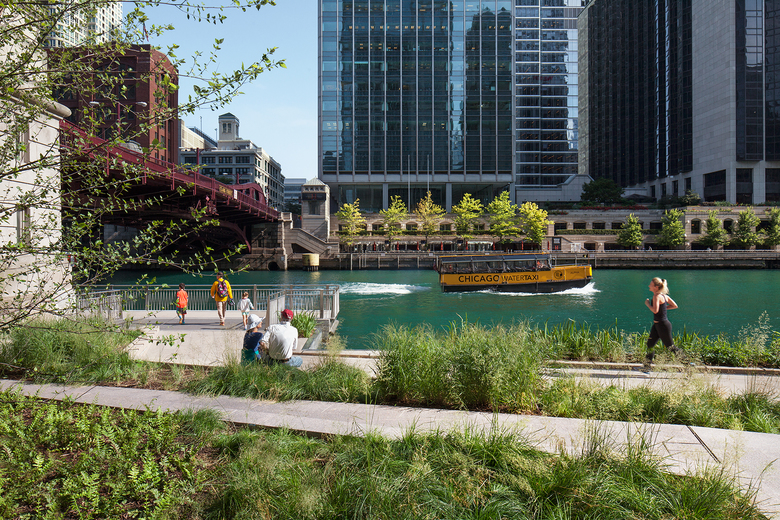 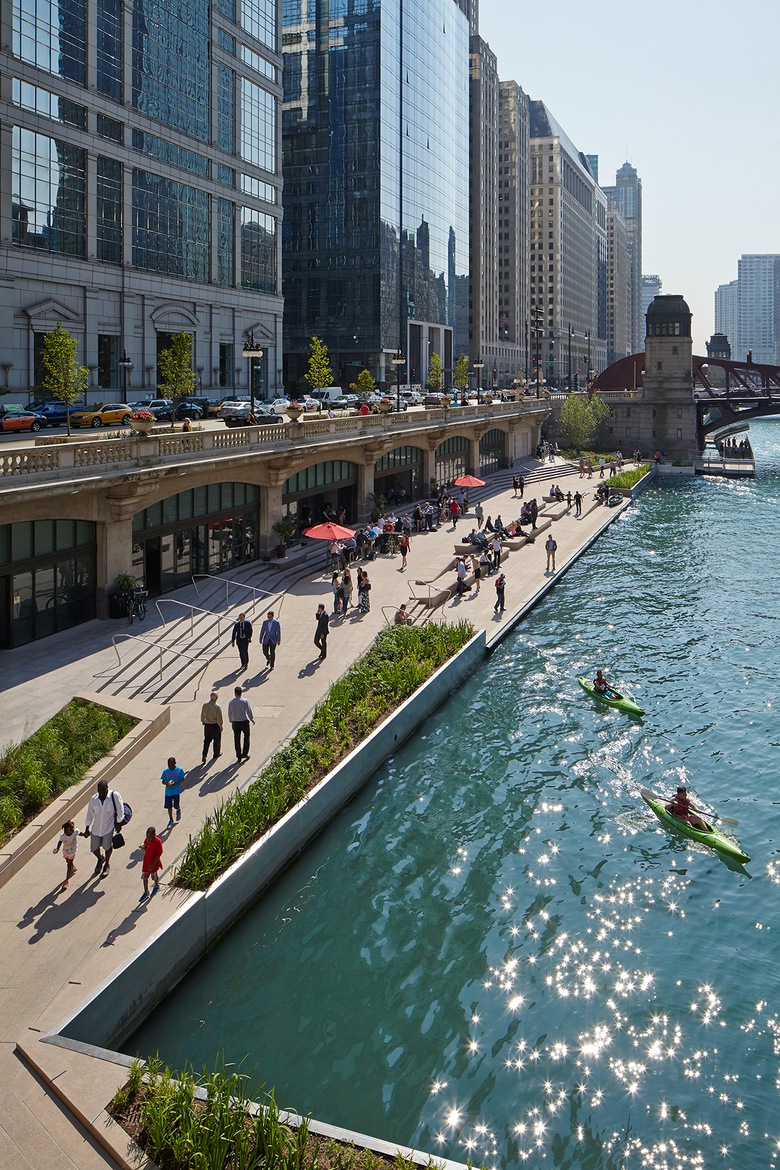 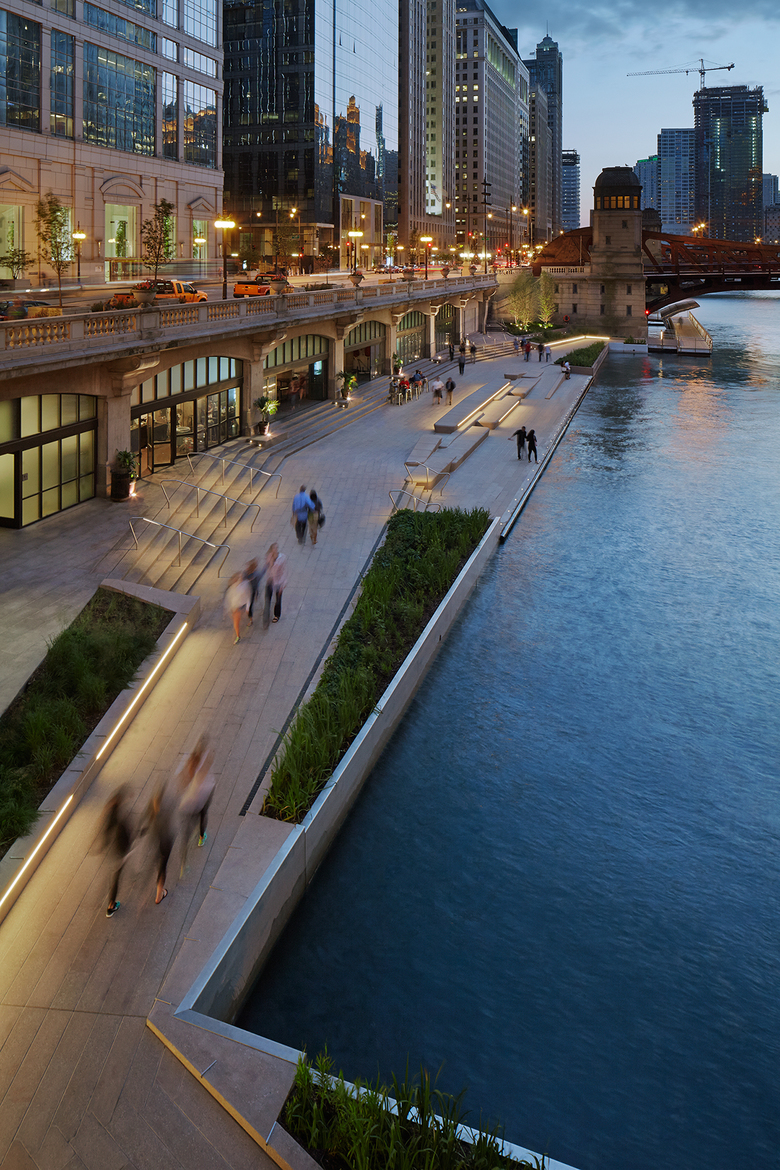 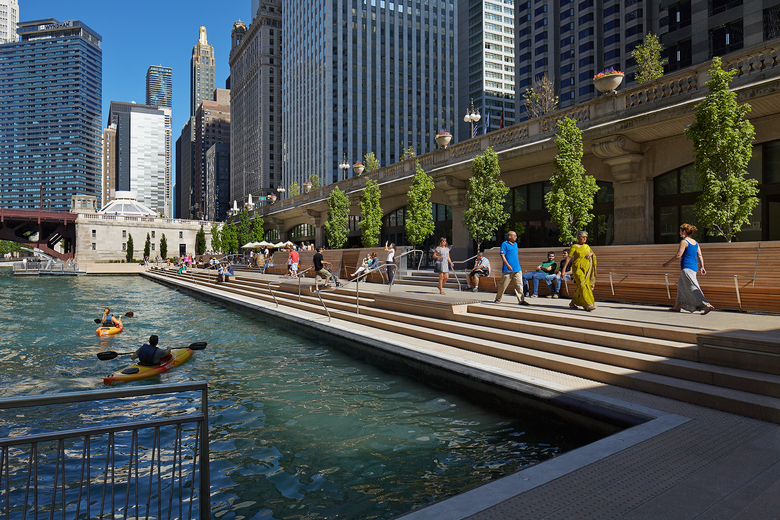 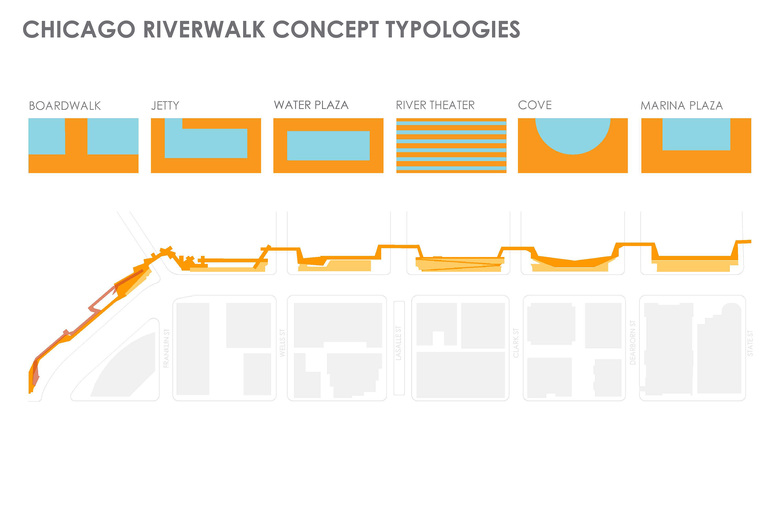 The Main Branch of the Chicago River has a long and storied history that in many ways mirrors the development of Chicago itself. Once a meandering marshy stream, the river first became an engineered channel to support the industrial transformation of the city. Following the famed reversal of the river, in which the city reversed the flow of the Main Branch and South Branch to improve sanitation, architect and urban planner Daniel Burnham introduced a new civic vision of riverside promenades with the addition of the Wacker Drive viaduct. Over the last decade, the role of the river has been evolving with the Chicago Riverwalk project—an initiative to reclaim the Chicago River for the ecological, recreational and economic benefit of the city.

The goal of embracing the river as a recreational amenity seemed impossible years ago given the river's high levels of pollution. But today that vision is becoming a reality. Recent improvements in river water quality and the increased intensity of public recreational use signal growing life along the river, demanding new connections to the water's edge. Accordingly, the Chicago Department of Transportation and Ross Barney Architects led Phase One of the Riverwalk, an initial segment that includes Veteran’s Memorial Plaza and the Bridgehouse Museum Plaza.

In 2012, the team of Sasaki, Ross Barney Architects, Alfred Benesch Engineers, and Jacobs/Ryan Associates, supported by technical consultants, was tasked with completing the vision for Phases Two and Three:  six blocks between State Street and Lake Street. Building off the previous studies of the river, the team’s plans provide a pedestrian connection along the river between the lake and the river’s confluence.

The task at hand was technically challenging. The design team, for instance, needed to work within a tight permit-mandated 25-foot-wide build-out area to expand the pedestrian program spaces and negotiate a series of under-bridge connections between blocks. Further, the design had to account for the river’s annual flood dynamics of nearly seven vertical feet.

Turning these challenges into opportunities, the team imagined new ways of thinking about this linear park. Rather than a path composed of 90-degree turns, the team reconceived of the path as a more independent system—one that, through changes in its shape and form, would drive a series of new programmatic connections to the river.

With new connections that enrich and diversify life along the river, each block takes on the form and program of a different river-based typology. These spaces include:

The Cove: Kayak rentals and docking for human-powered crafts provide physical connections to the water through recreation.

The River Theater: A sculptural staircase linking Upper Wacker and the Riverwalk offers pedestrian connectivity to the water’s edge and seating, while trees provide greenery and shade.

The Water Plaza: A water feature offers an opportunity for children and families to engage with water at the river’s edge.

The Jetty: A series of piers and floating wetland gardens offers an interactive learning environment about the ecology of the river, including opportunities for fishing and identifying native plants.

The Boardwalk: An accessible walkway and new marine edge creates continuous access to Lake Street and sets the scene for future development in this critical space at the confluence.

As a new connected path system, the Chicago Riverwalk design provides both continuity and variety for a park visitor. The distinct programs and forms of each typological space allow for diverse experiences on the river ranging from dining opportunities to expansive public event programming to new amenities for human-powered craft. At the same time, design materials, details, and repeated forms provide visual cohesion along the entire length of the project. Paving, for instance, mirrors the contrasts of the existing context: A refined cut stone follows the elegant Beaux-Arts Wacker viaduct and bridgehouse architecture, while a more rugged precast plank flanks the lower elevations and underside of the exposed steel bridges.