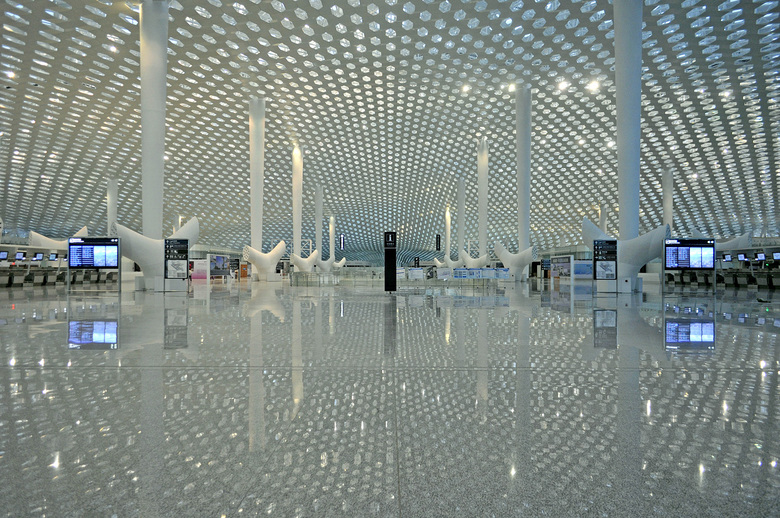 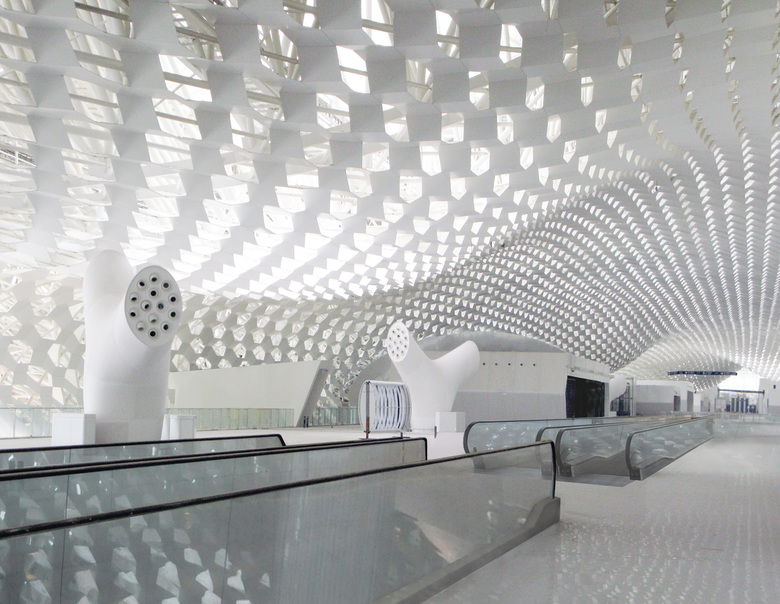 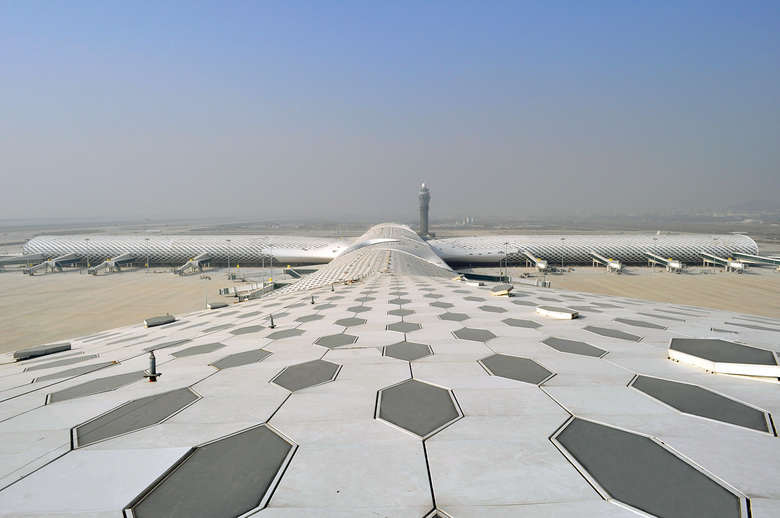 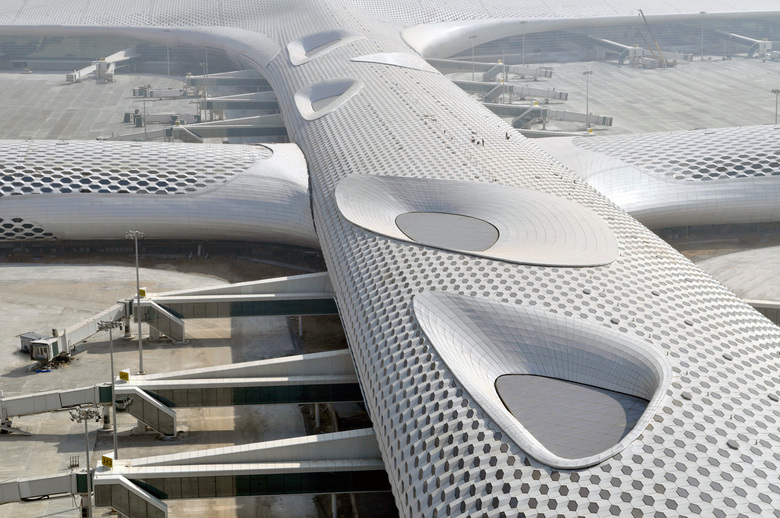 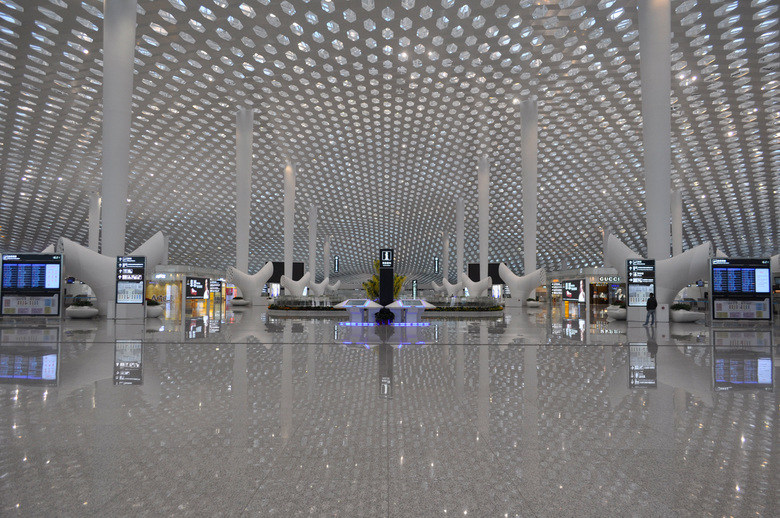 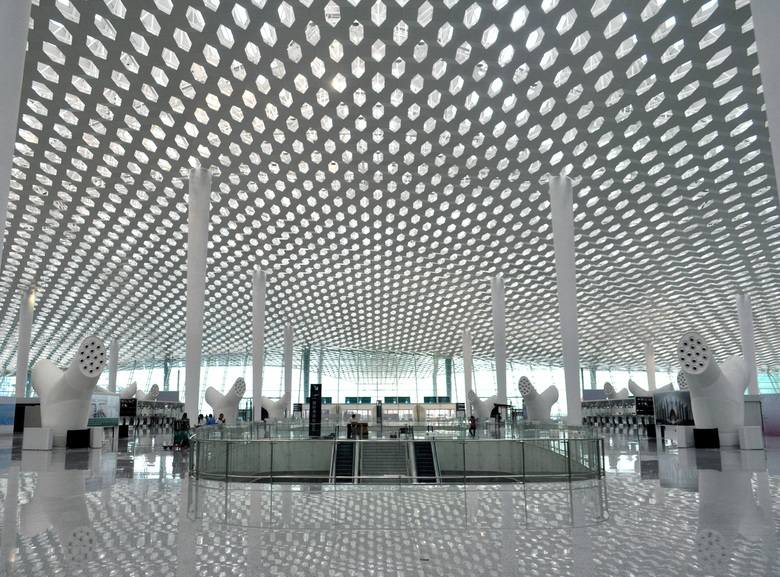 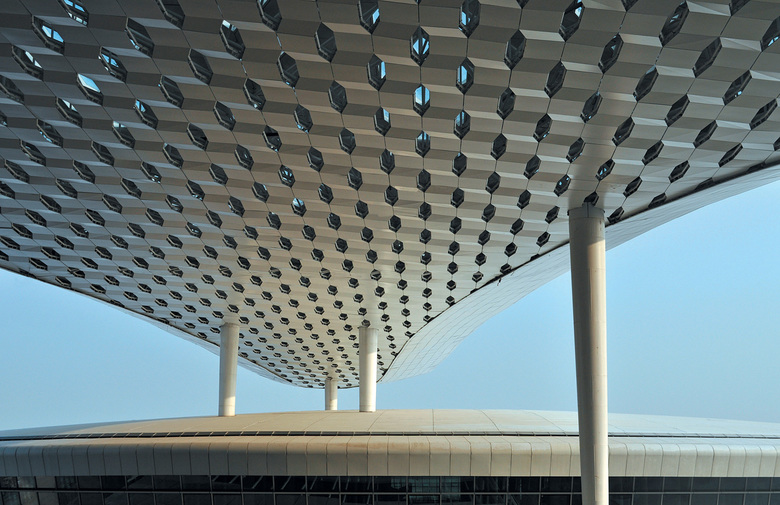 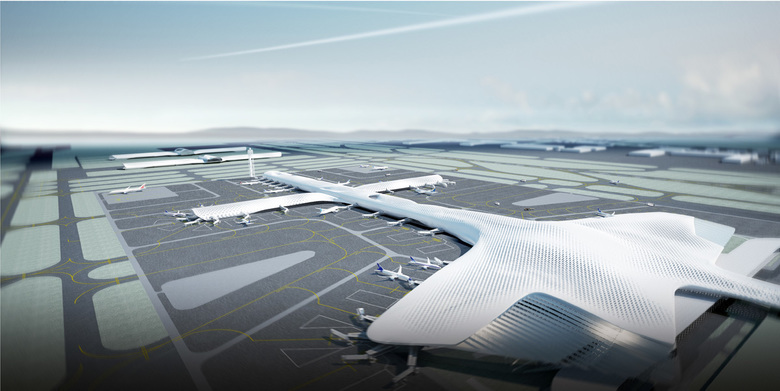 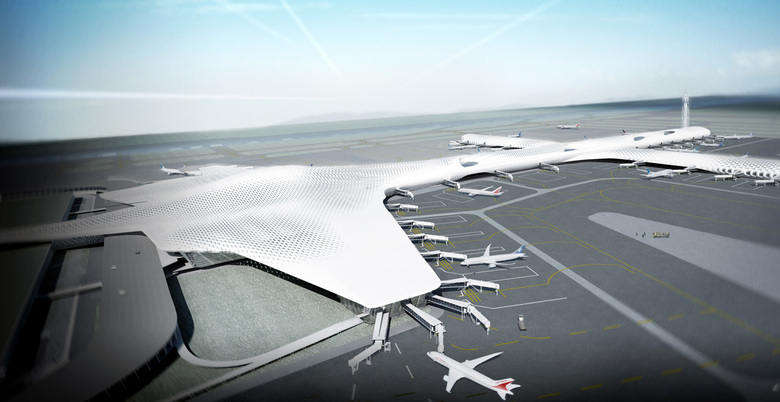 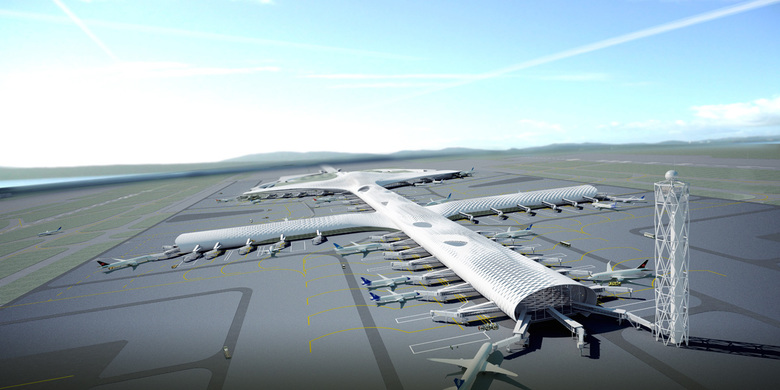 On 11.28.2013 the new Terminal 3 at Shenzhen International Airport will open after just five years of planning and construction. With an overall length of 1,500 m and a gross floor space of 500,000 m2, it increases the capacity of the existing airport in future by up to 40 million passengers per year.

The project is the result of an international competition held in 2008, from which the team of Italian architect Massimiliano Fuksas supported by German engineers Knippers Helbig emerged victorious. Based on a given building organisation and floor plan structure, a freely shaped terminal design was developed allowing plenty of natural light through a large number of openings in the interior.

The terminal roof spans 700 m over the check-in area reaching a height of 25 m and is supported by slender columns in a 36 m grid layout. From there the route leads past restaurants to the main concourse, where the overview of the 1,000 m long section of the building – with its strongly modelled ceiling shape and groups of shops some extending over two floors – gives a spacious feeling. The concourses are column-free and in the transverse direction span up to 45 m. At the intersection with the cross-concourses branching off to the sides there is an approx. 80 m wide piazza.

The initial design development began with clay models by the architect M. Fuksas which were subsequently digitalised using Rhino 3d. Knippers Helbig then undertook the discretisation of the surfaces, implementing this with the aid of specially developed parametric software tools. The openings and inclination angles of the panes of glass were equally matched to each other as were the daylight and energy input. Developing the geometry involved the specification of the structure the steel construction as well as the coordinates of all facade elements of the outer shell. The program allowed iterative optimisation of the facade at very short time intervals, making it possible to complete the preliminary design of both the facade and the structure within the short space of a year, with handover of the geometry, static and rule details of the framework and facade. The project planning was then taken over by the BIAD Office in Beijing.

Knippers Helbig was responsible for the development of structural solutions for the reinforced concrete of the arrival and departure levels as well as for the static analysis of the steel structures of the roof and facade. Here, the diamond-shaped structure refers directly to the honeycomb shape of the facade and is stiffened additionally by cross members. The spring-loaded bearing bolts of the steel structure permit uniform distribution of temperature and especially seismic loads on the supports, creating a unified impression of the structural elements up to 400 m long.

The building envelope is dominated by a honeycomb-like facade which through its double skin largely permits indirect light to enter the interior through 25,000 openings. Depending on the sun’s position, rays of sunlight also enter the building directly, offering unusual continuously changing lighting effects throughout the day. At numerous places along the concourses, strip-like windows offer panorama views of the airfield.

The success of project is the result of the close collaboration between Italian, German and Chinese planners and thanks to the great openness of the client towards innovative approaches to design and planning tools as well as unconventional technical solutions. (Text: Knippers Helbig Advanced Engineering Stuttgart - NewYork)