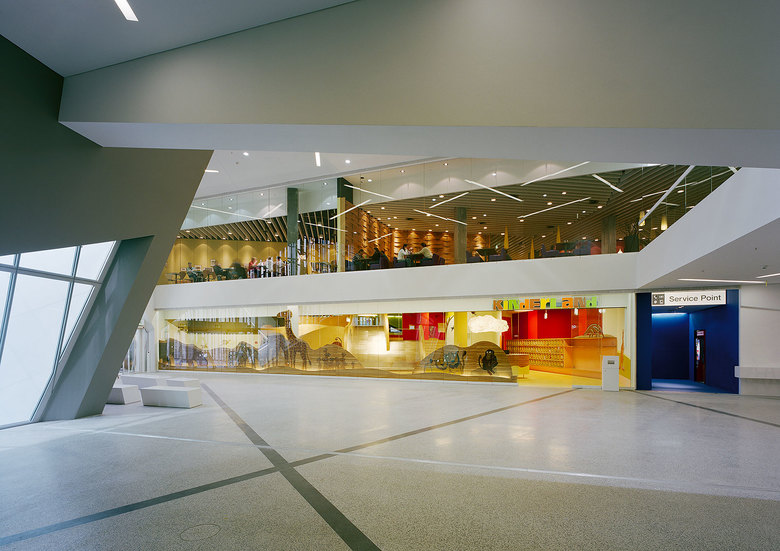 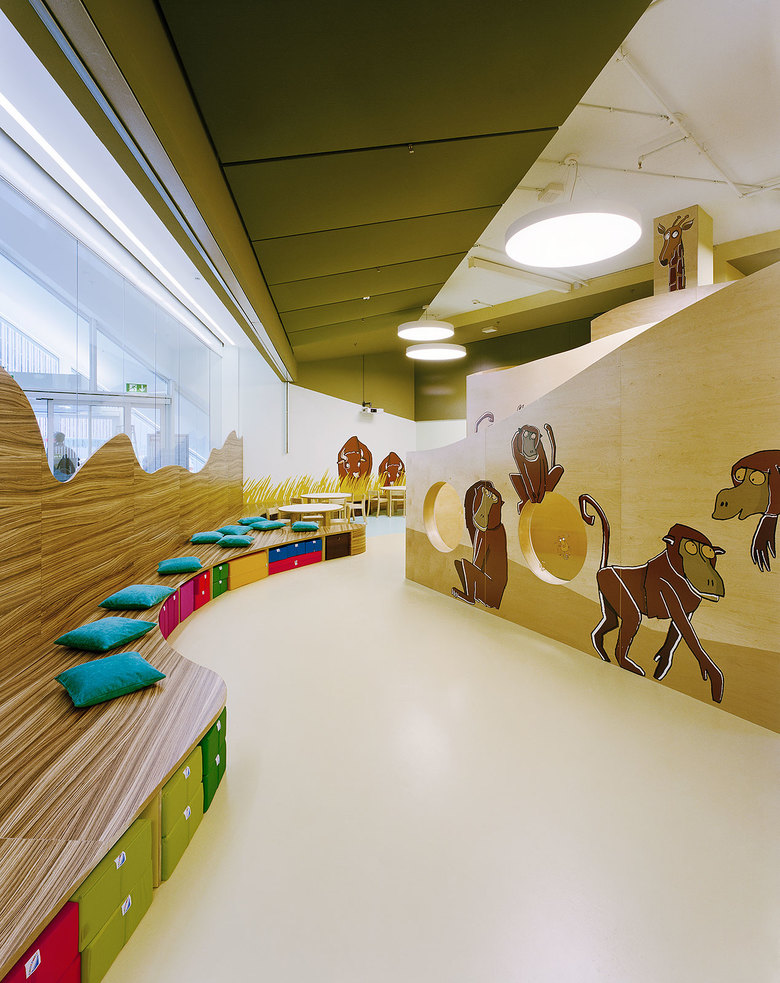 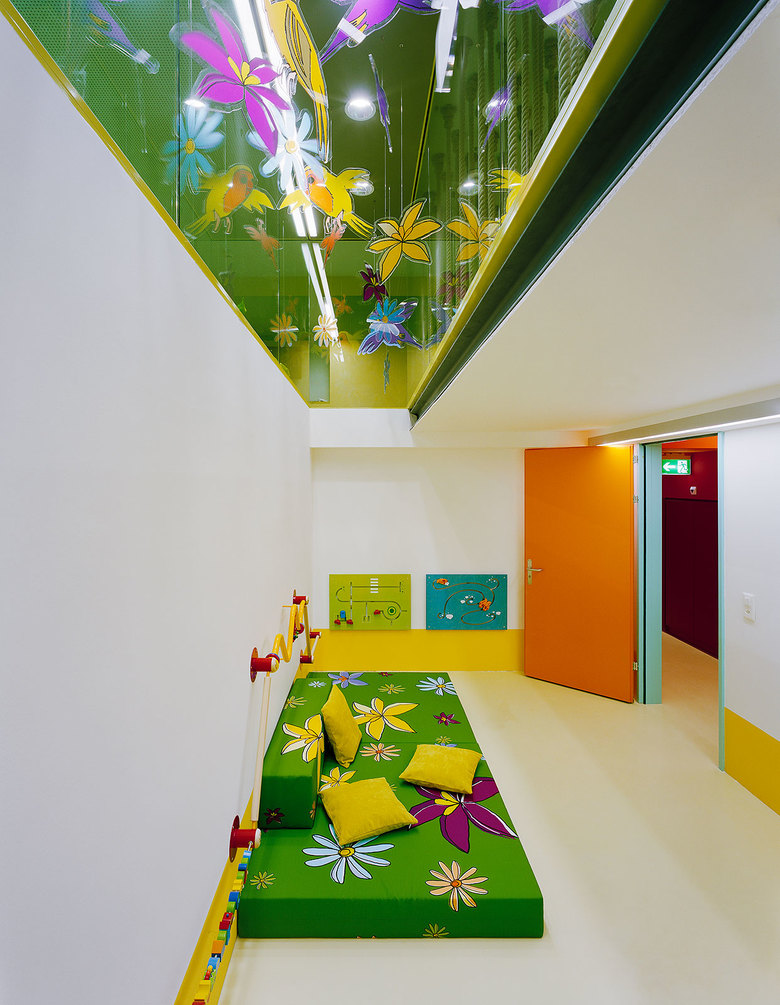 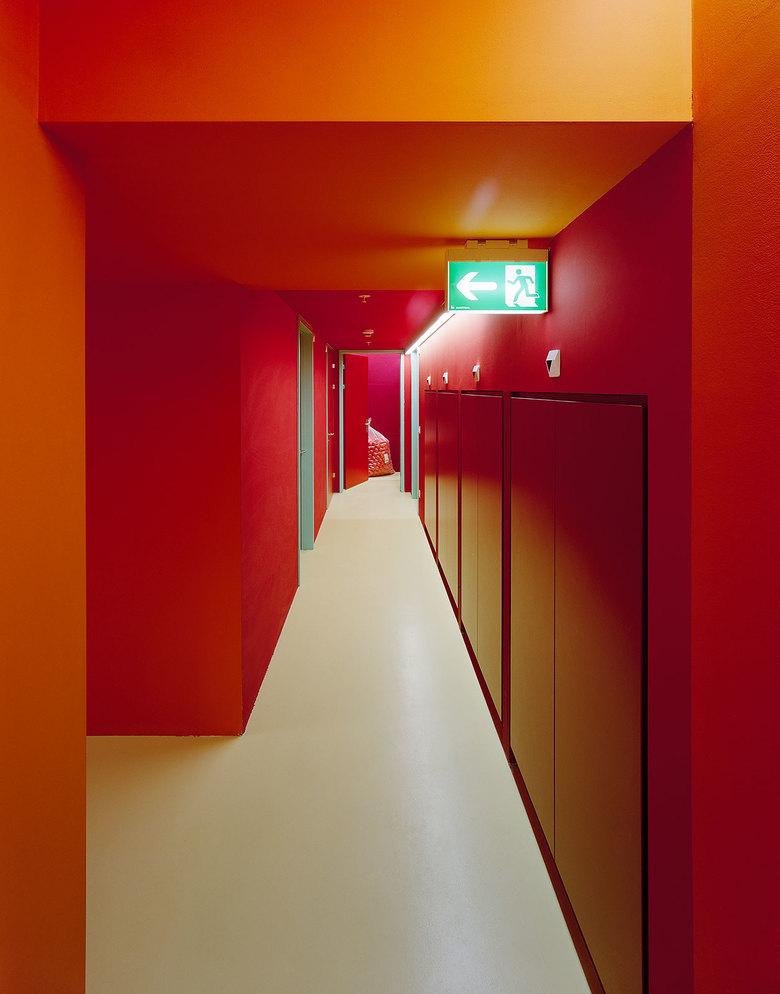 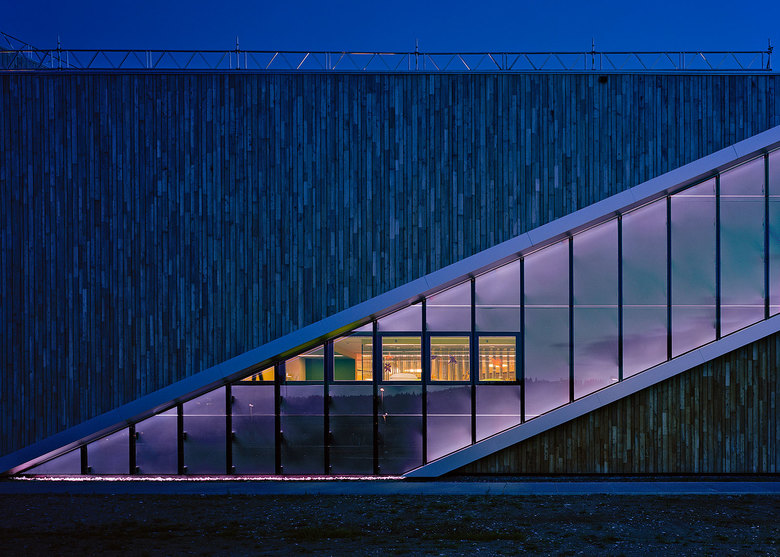 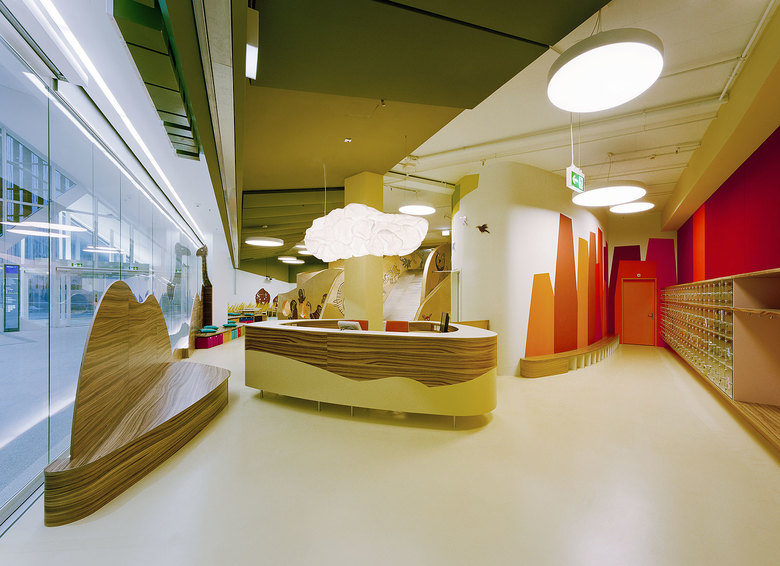 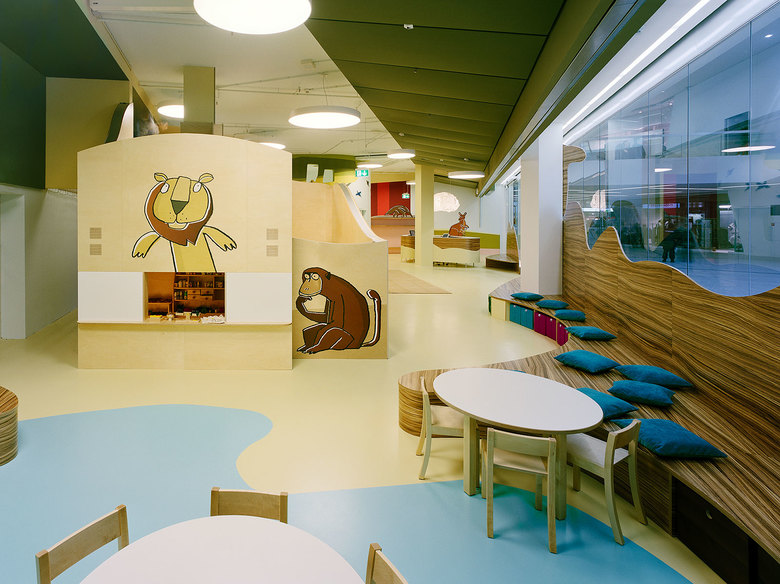 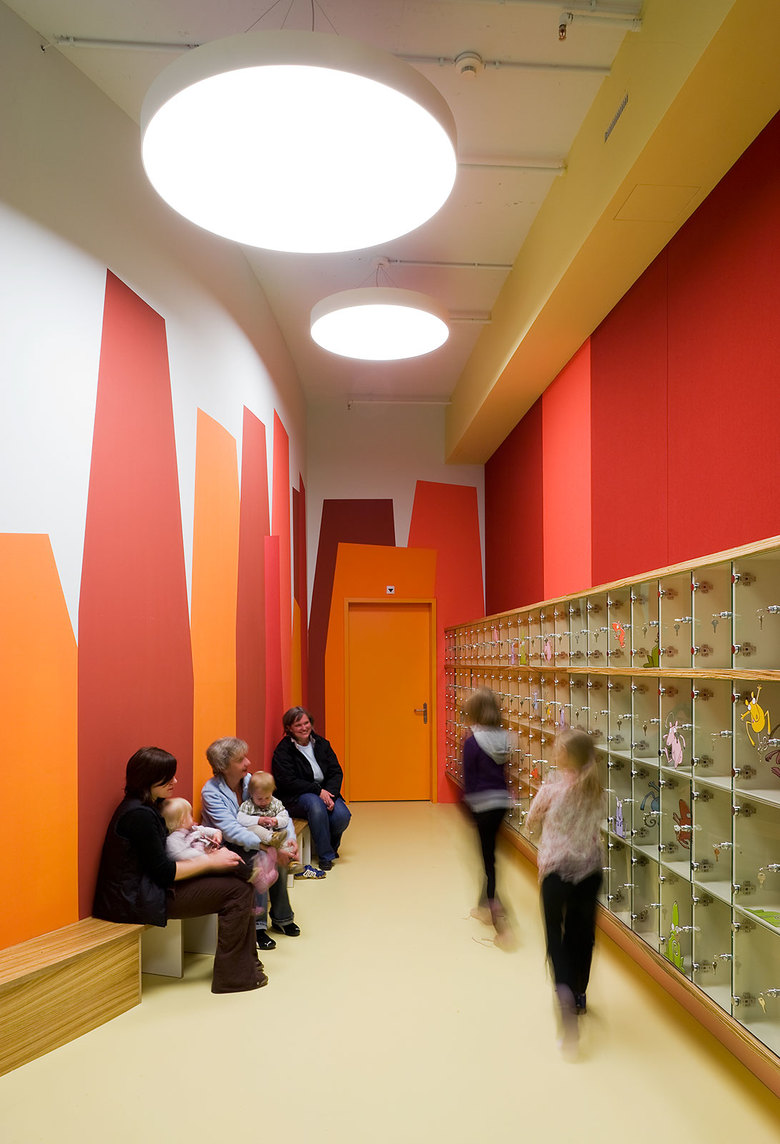 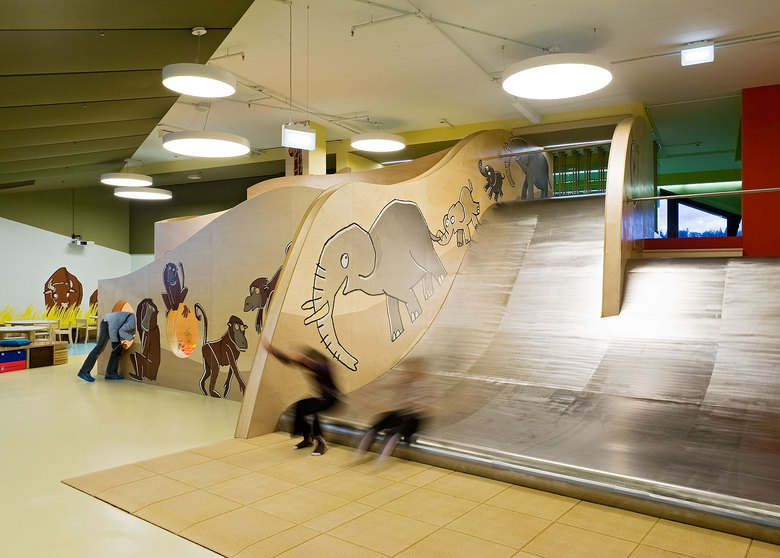 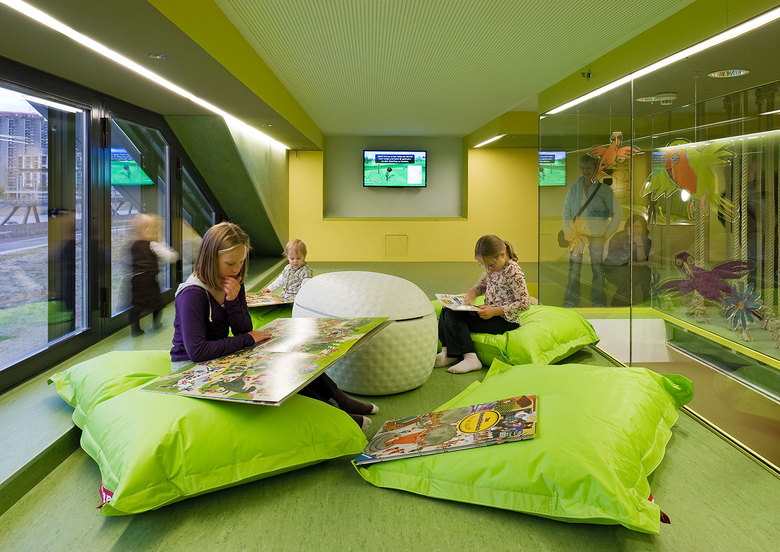 Kinderland in Bern’s “West Side“

Ravensburger and raumhochrosen are to design the Kinderland in the newly opened “West Side” in Bern.

Ravensburger, a traditional company with extensive experience, is known for challenging game designs as well as the professional production of game worlds in all sizes. They have found an engaged partner in the architectural office from Bregenz to design imaginative high quality spaces and to implement their construction.

In Kinderland up to a hundred children between the ages of 0 to 12 can simultaneously play, do crafts, climb, fool around or simply relax under the supervision of specialized carers for hours while their parents spend time in the shopping mall, the food court, the cinema centre or the adventure swimming pool of the West Side.

The West Side, designed by the New York architect Daniel Libeskind is the newest shopping and free time centre in Switzerland with 55 individual shops, an adventure pool, a cinema centre as well as ten restaurants, a hotel and a senior residence. This seamless unity of shopping, senior residence, hotel and free time offers on the city periphery of Bern is the realisation of a 40 year old vision of city planning and is accessible in only eight minutes from the city centre with the commuter train.

All too often children say, “Shopping is so boring”; their parents find it “terribly exhausting” when they take up the ritual of shopping with their offspring. There is often little room for childish spontaneity among the extreme irritations and offers of the shops and their advertising world. The discipline to try and take only select things on the endlessly long journey is a challenge.

An oasis of play in the shopping world

This is why in the middle of this shopping world Kinderland offers an oasis of play which does justice to the demands and abilities of the children between the ages of 0 and 12 years. Up to six carers watch over the children, guide them, provide for them and put them down to rest when they are tired. Security is also ensured; not only the giraffes but also the carers have an overview of the diverse play areas with the aid of several cameras.

Here the children have the opportunity to act on their need for physical activity in the climbing landscape and discovery trips or to lose themselves in individual crafts, games and reading. Although electronic games are also offered, they are pushed to the back in order to maintain balance with the analogous game offers. The central resting room and a lavatory for little children are available for quiet times and for special game activities or children’s birthdays. Many game surfaces subtly extend into each other. With only a few utensils and the fantasy of the children, they can be transformed into one of many play options in the wink of an eye.

The design is oriented on the basic theme of “animals in the savannah”, a habitat which can be found on every continent and incorporates the whole planet. Whether as a North American prairie, an Asian steppe or an African savannah the design is usually characterised by regular pictures of the landscape inhabited by various creatures and plants. Many are already known to the children – like lions and elephants, but, nonetheless, a sufficient number of new and unexpected animals wait to be discovered.

Soft silhouettes of hills and other notable elements of the landscape serve as the starting point for components which extend over two levels to form a comprehensive landscape.

Other Projects by Heike Schlauch raumhochrosen