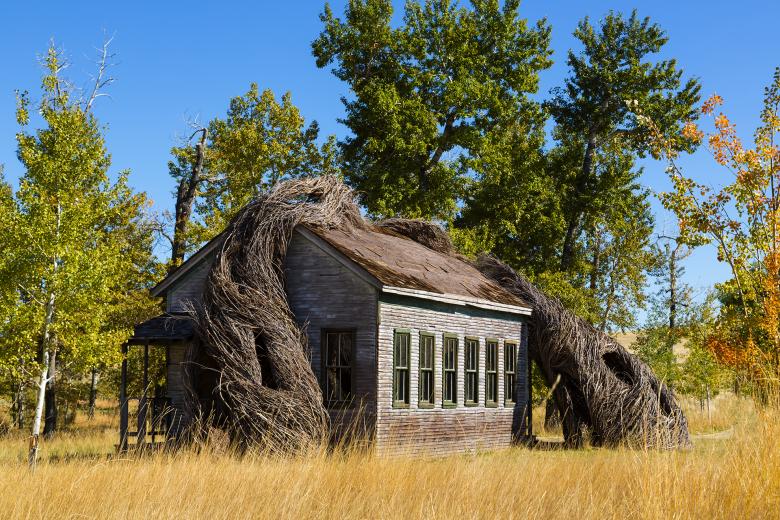 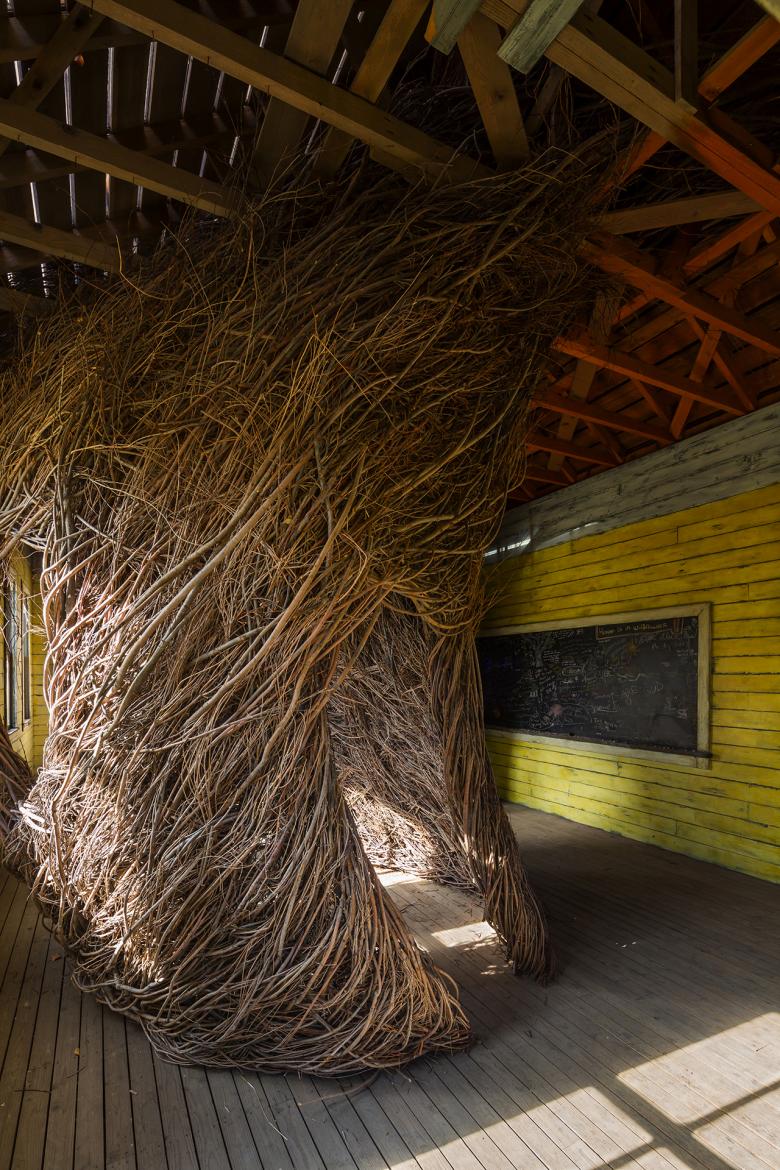 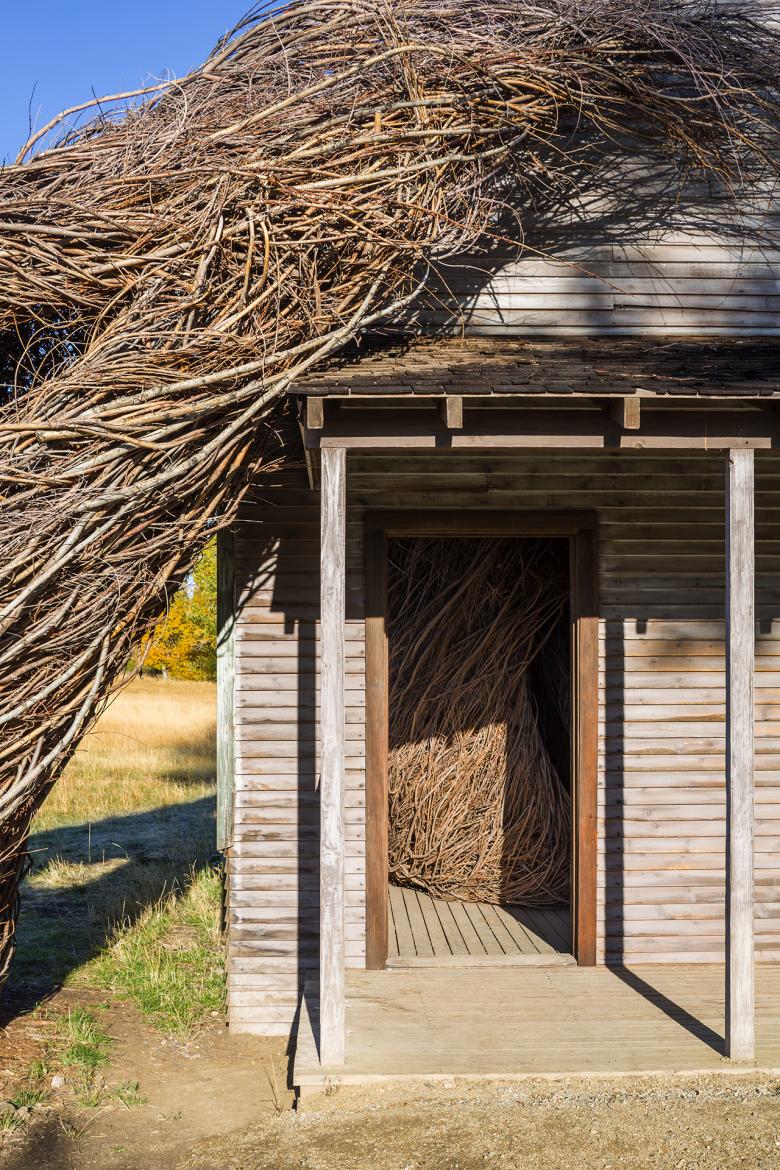 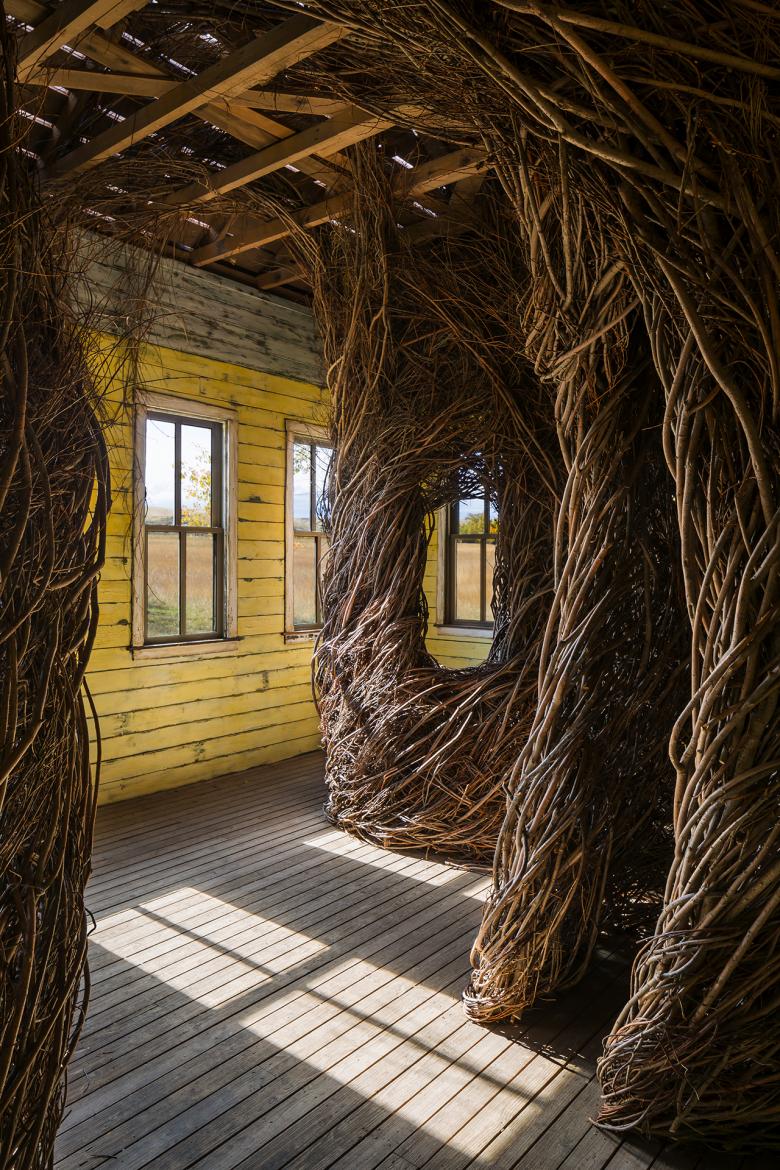 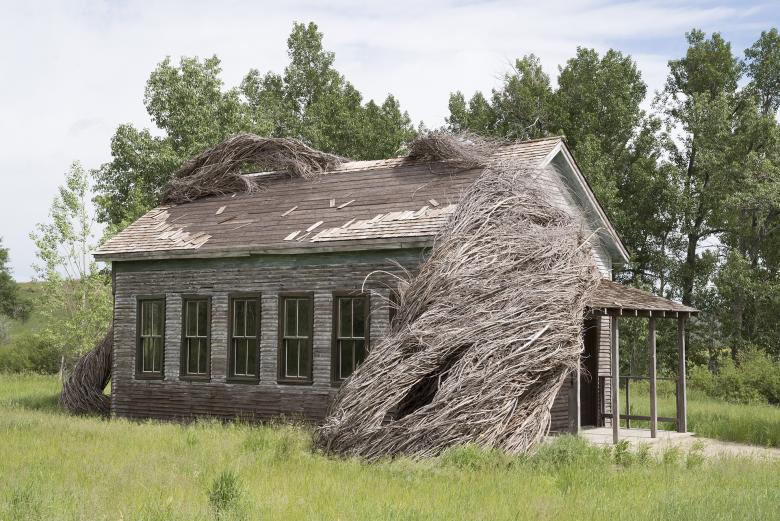 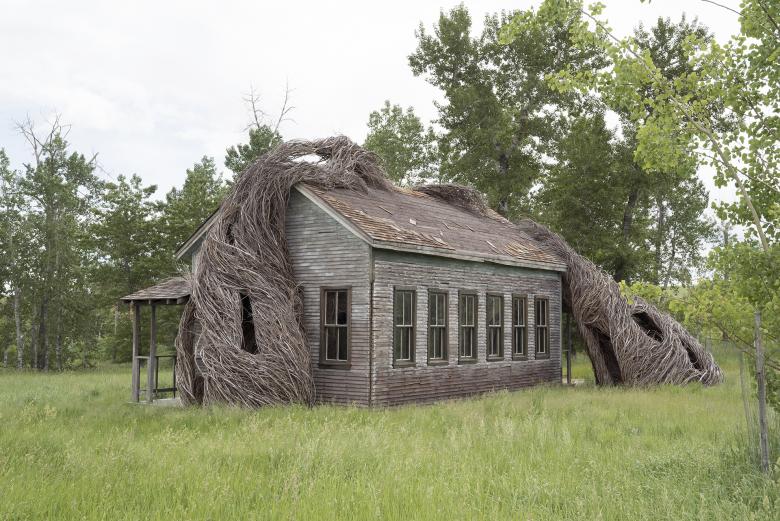 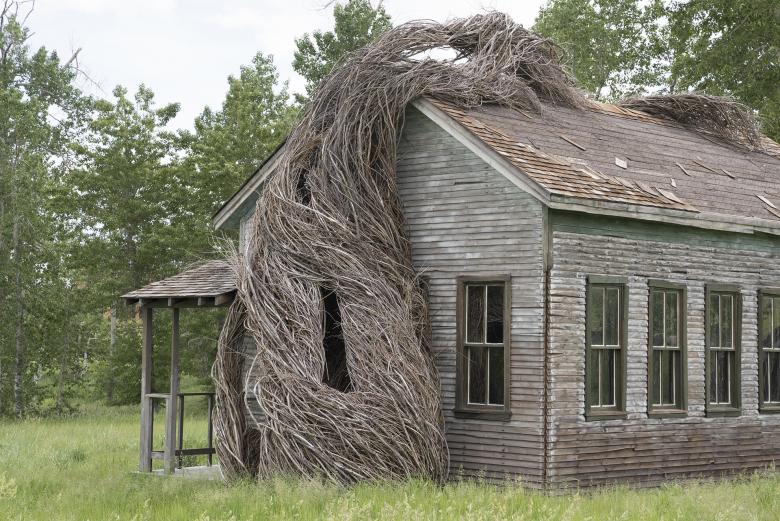 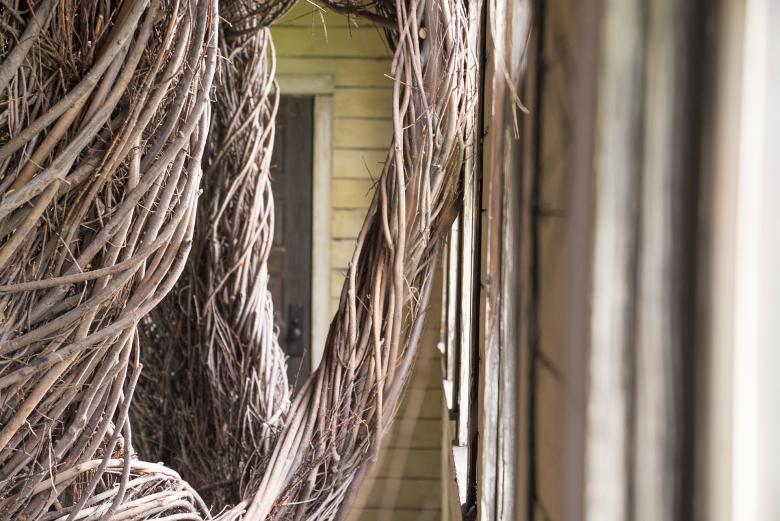 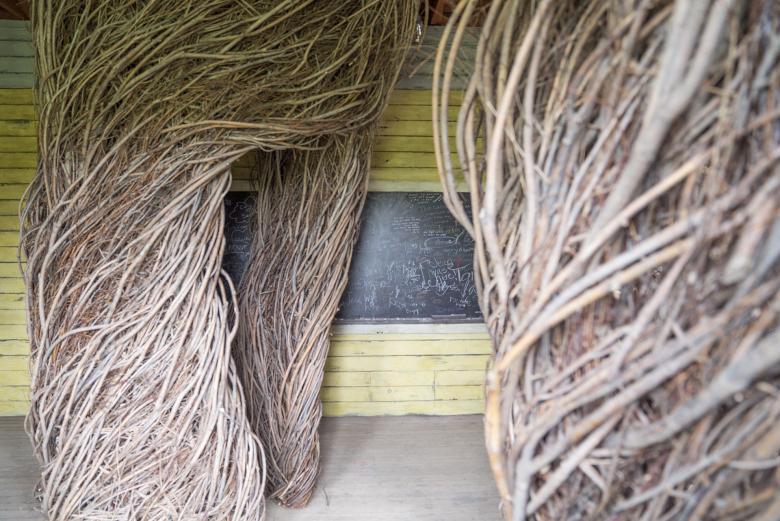 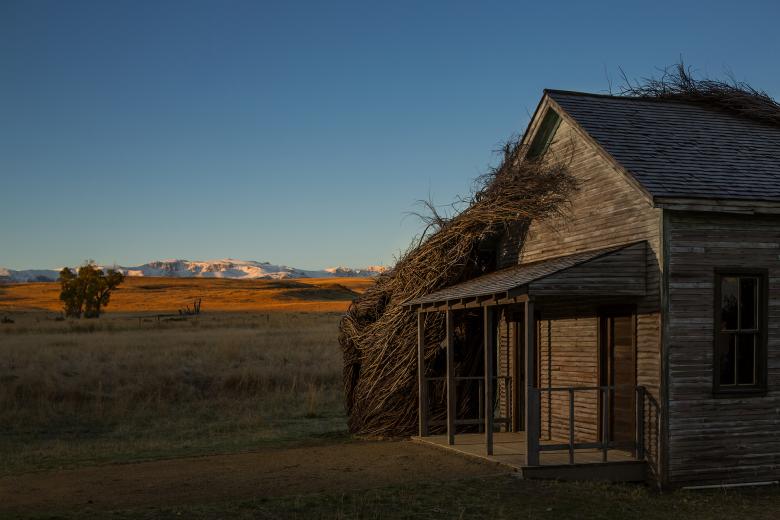 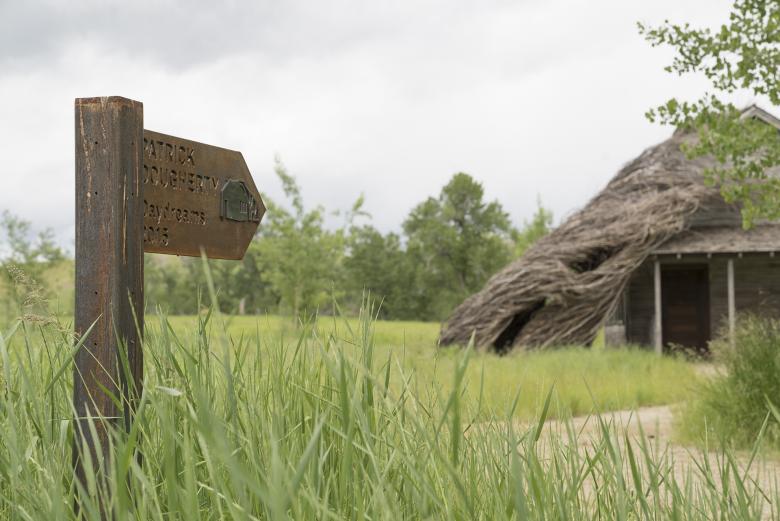 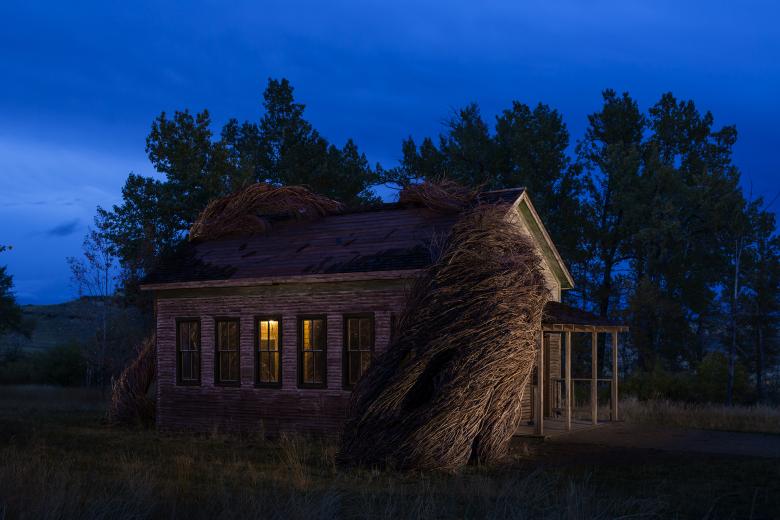 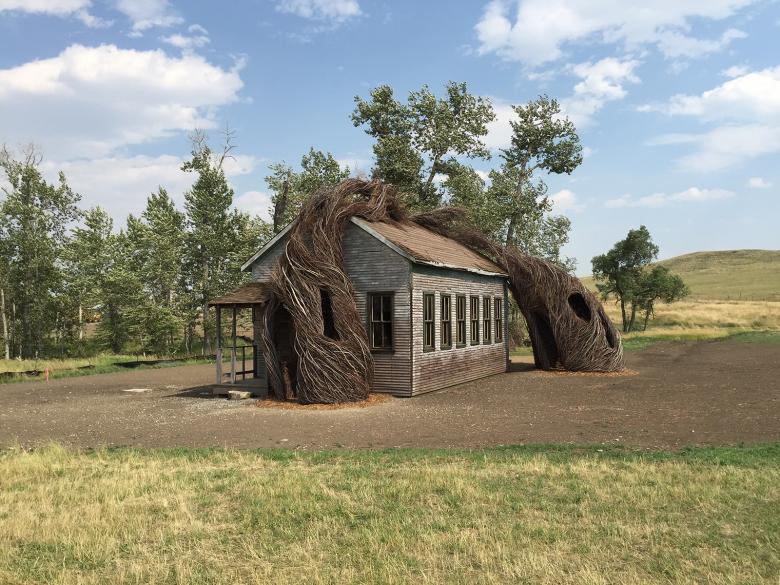 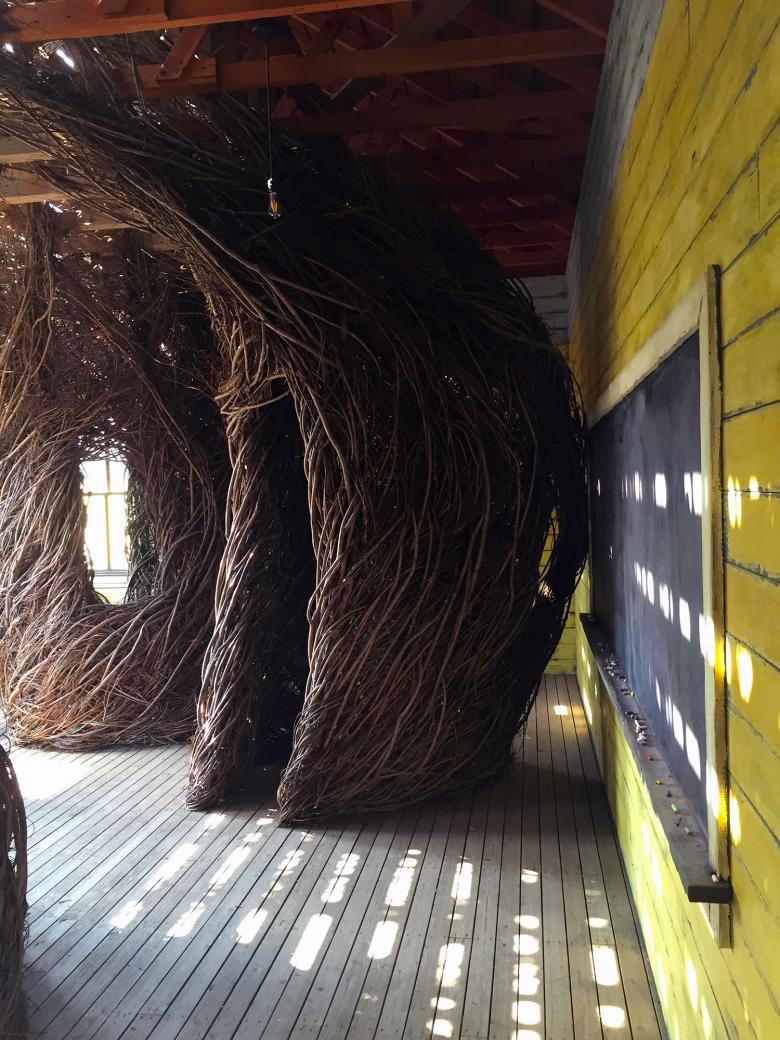 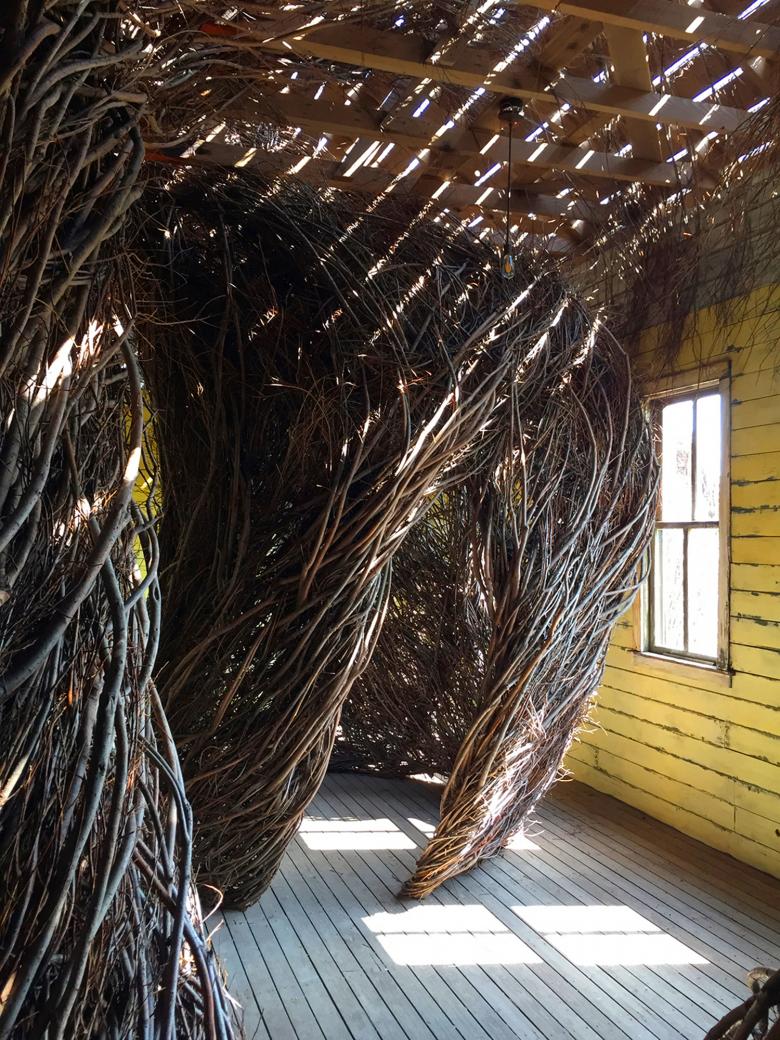 In January 2015, Cushing Terrell was contacted about designing a building to be used as a backdrop for a famous sculptor’s on-site commission at the 12,000-acre-spanning Tippet Rise Art Center, located just outside Fishtail, MT. The program requirements for the project were very simple: replicate a late-1800s one-room Montana schoolhouse to provide a relatively protected interior space for housing a sculpture made of saplings. The true purpose of the project was to inspire internationally-renowned Patrick Dougherty, who would design and create his sculpture while on-site.

Situated on a working ranch, it was important the project be constructed to minimize disturbance of the landscape. This involved maintaining a small job site footprint and using eco-friendly solutions such as corncob grit blasting for weathering the exterior wood. With few interior lights and no mechanical or plumbing systems, the project has nearly no impact on its environment. It is a passive inhabitant of its ecosystem.

The most difficult task for this project was determining the level of protection needed for the sculpture while creating a building that looked as if it was battered by a century of weather. Dougherty creates ephemeral sculptures out of native saplings, so long-term deterioration of his work was assumed. However, he requested the design team determine a way to protect the interior from water infiltration so as to maximize the potential for its longevity. This is typically not particularly difficult, but when replicating a more than 100-year-old, deteriorated schoolhouse, the task becomes significantly more challenging.

One element the team wanted to preserve was the look of a deteriorated roof allowing natural light to filter into the interior through gaps in the skip sheathing. This was achieved by sandwiching acrylic sheets between two layers of 1x planks in a seamless application invisible to the untrained eye.

A secondary challenge was creating interior and exterior finishes closely matched to those of nearby historic Stockade Schoolhouse. The first step in achieving this was thoroughly documenting the details of Stockade – noting layers of paint and elements of detailed deterioration such as subtle discoloration from differential rates of water damage, ghosted “memories” of since-removed built-in shelving, and rows of rusted nails once holding shingles.

The second step was reviewing full-scale mockups with the client and contractor — JxM & Associates — to determine the best “recipe” of finish techniques. The importance of having a contractor who was willing to experiment throughout the project cannot be understated.

The final step was a hands-on approach to construction administration, walking through subtle details and tweaks to the finished recipe with Tippet Rise staff, while JxM worked on each element.

The bulk of the project spanned an unbelievably quick six months – the original phone call and feasibility studies in January 2015 and substantial construction completed by the end of June, with Dougherty’s installation beginning over the Fourth of July weekend (and lasting three weeks). To speed completion, the walls were pre-fabricated in Bozeman, MT, and shipped to the installation site.