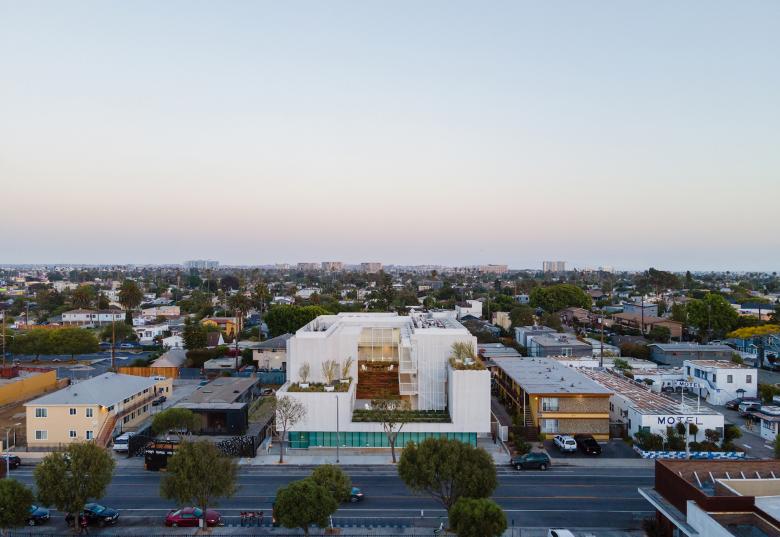 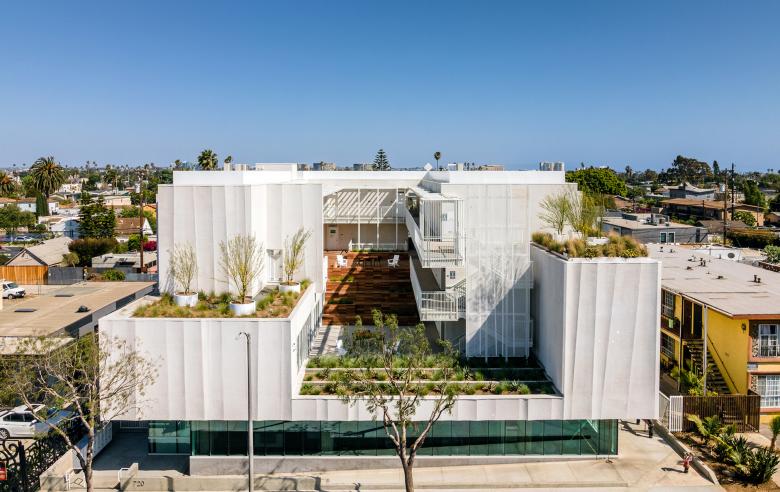 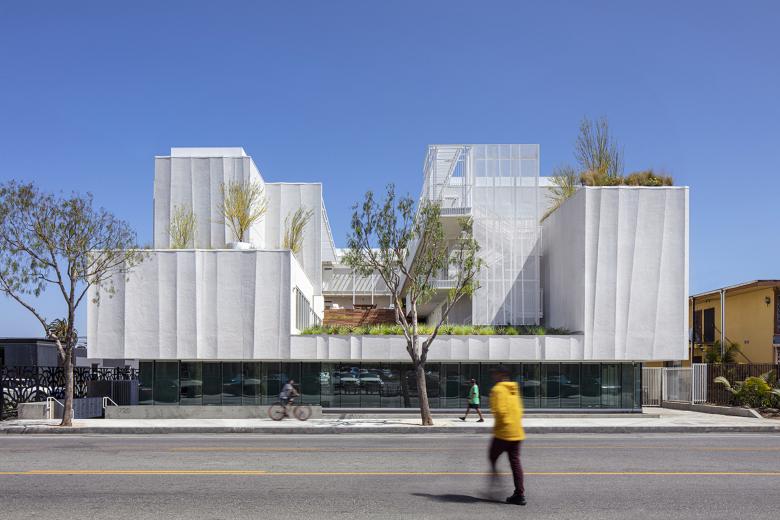 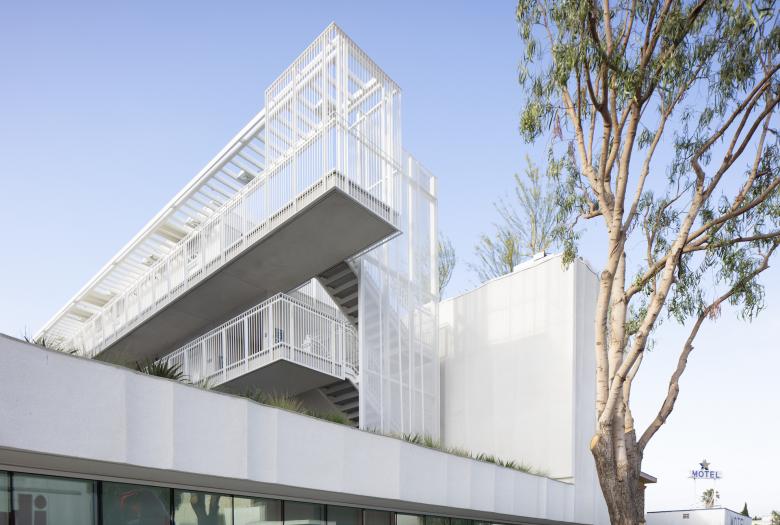 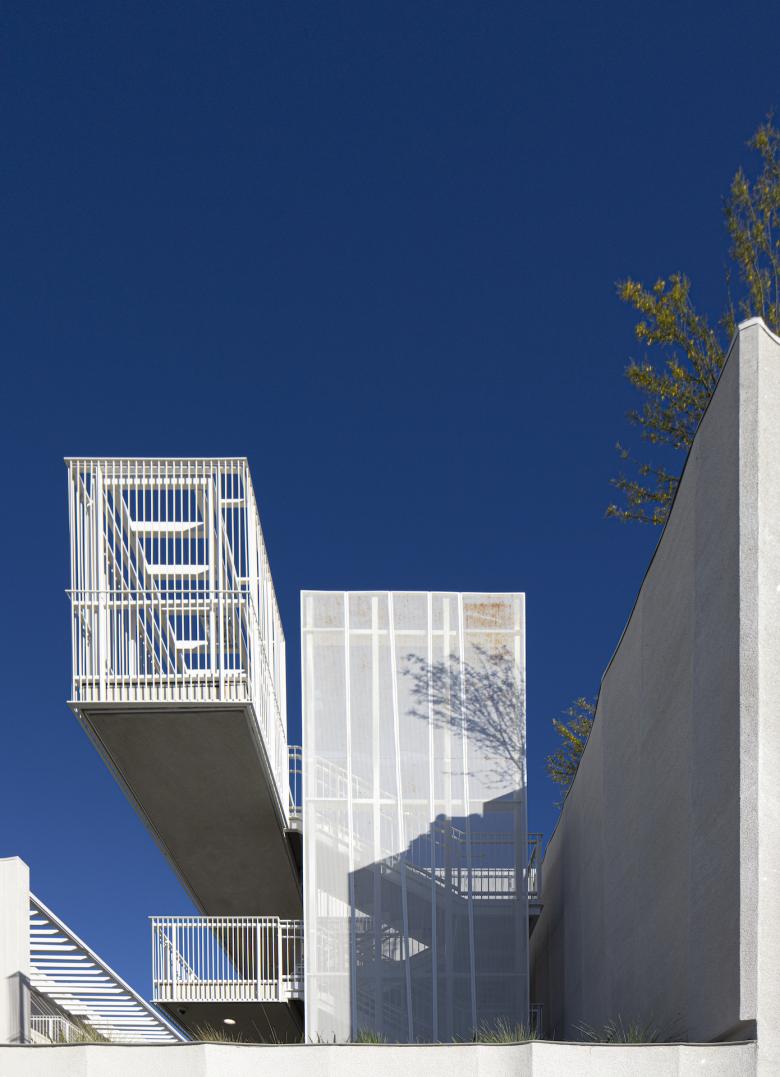 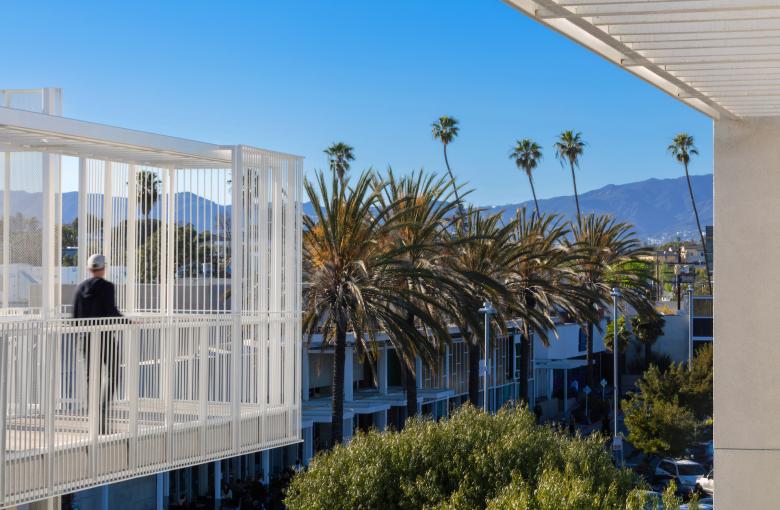 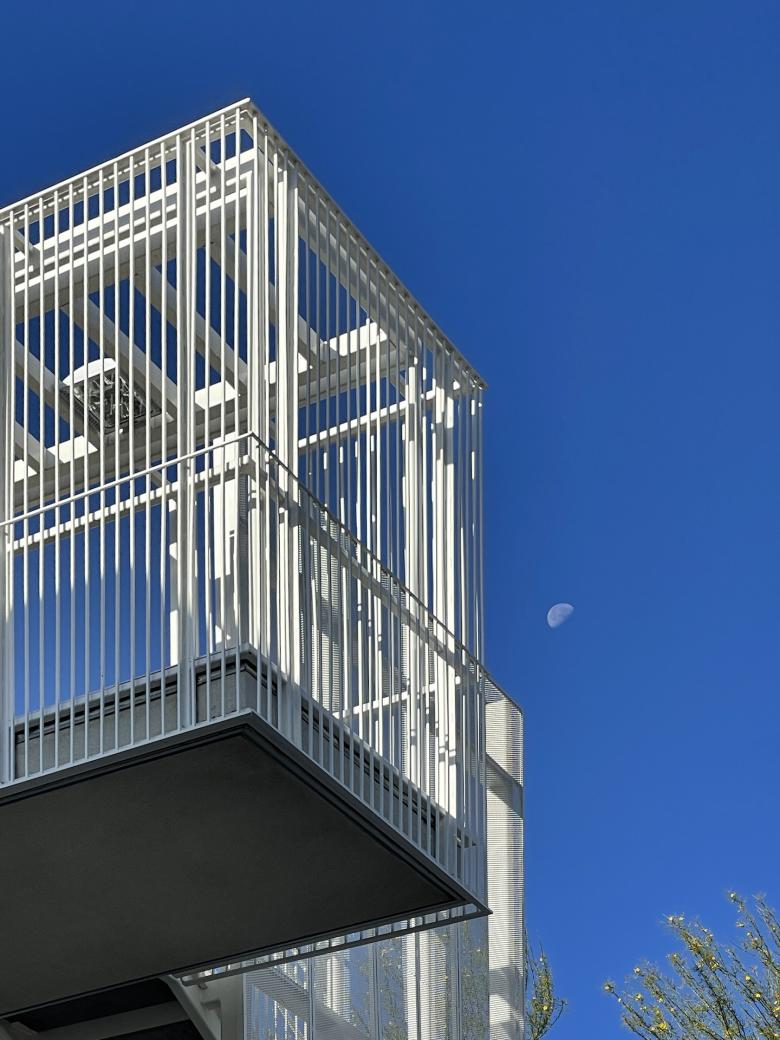 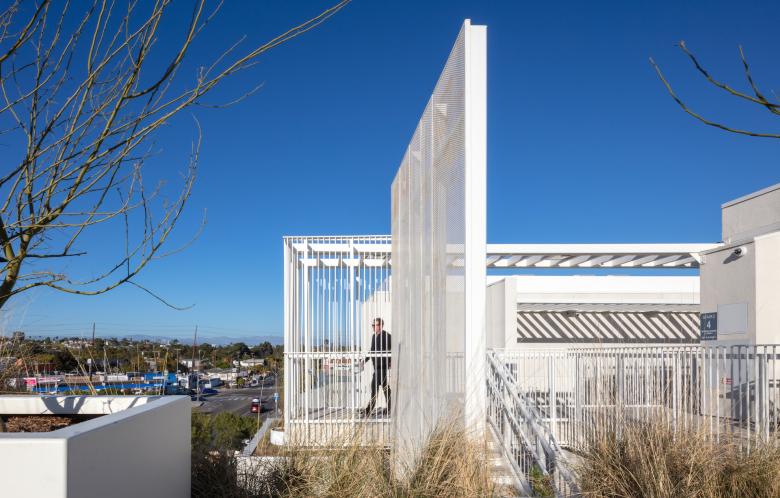 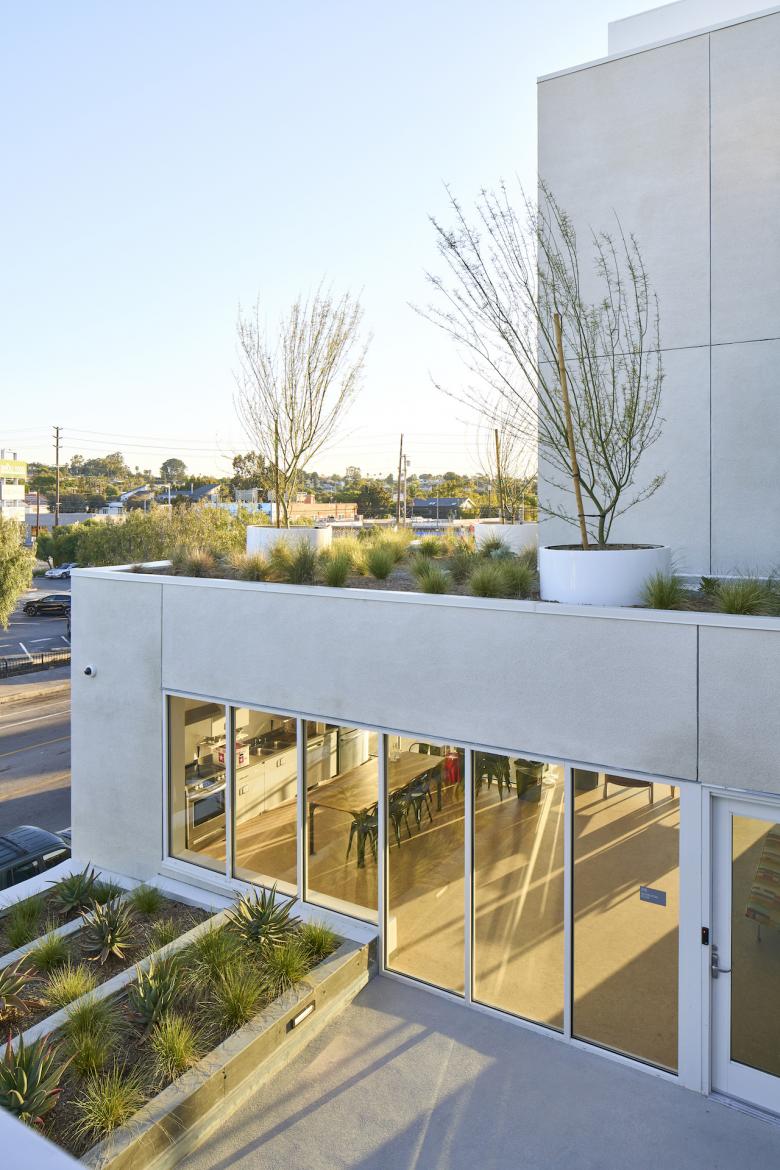 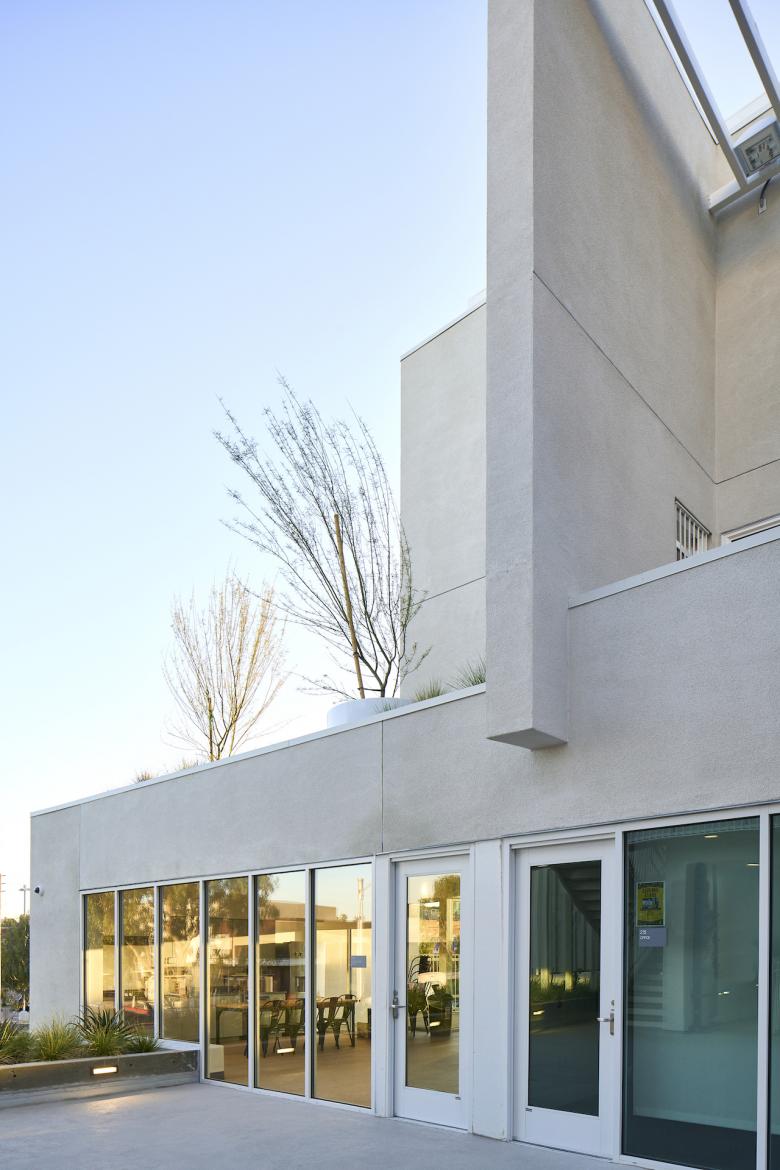 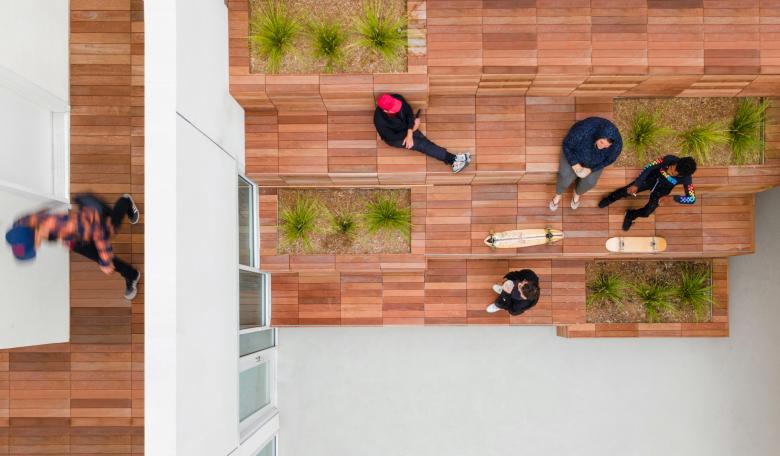 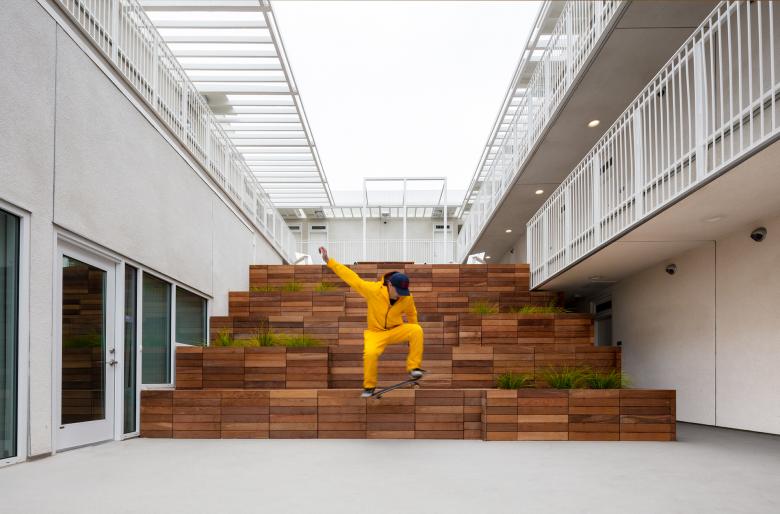 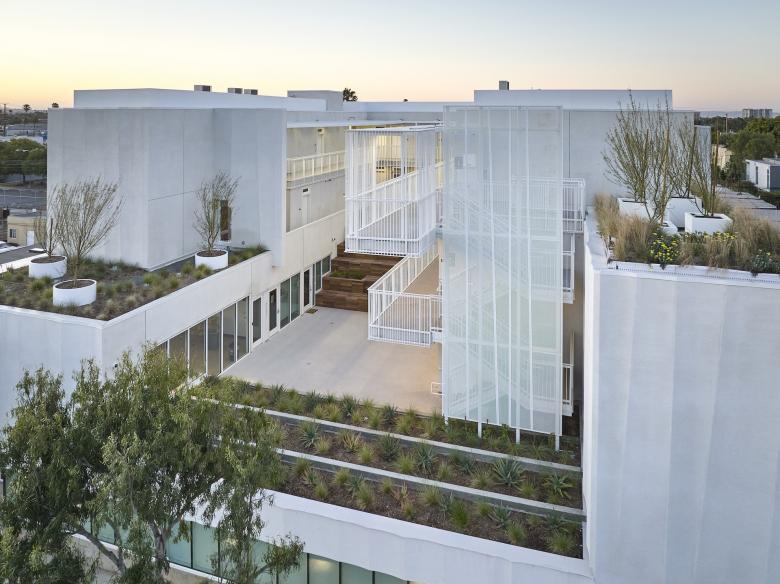 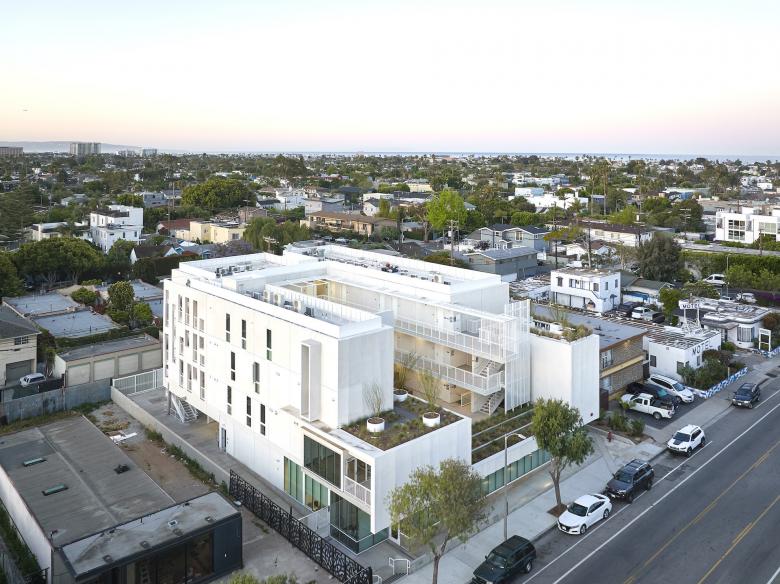 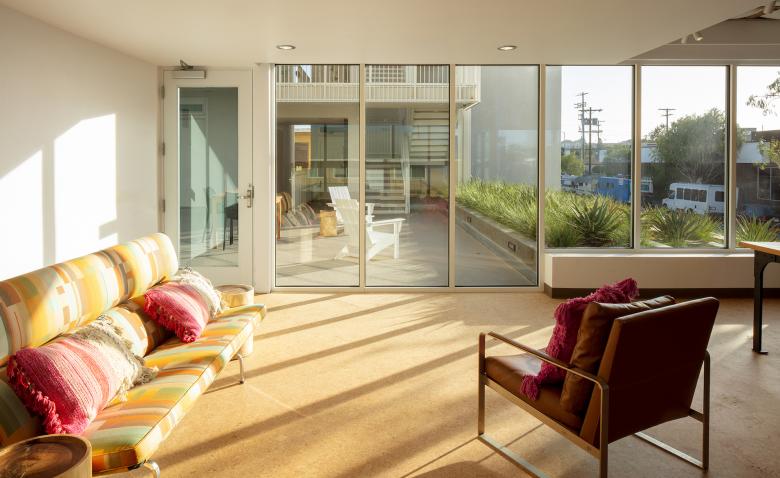 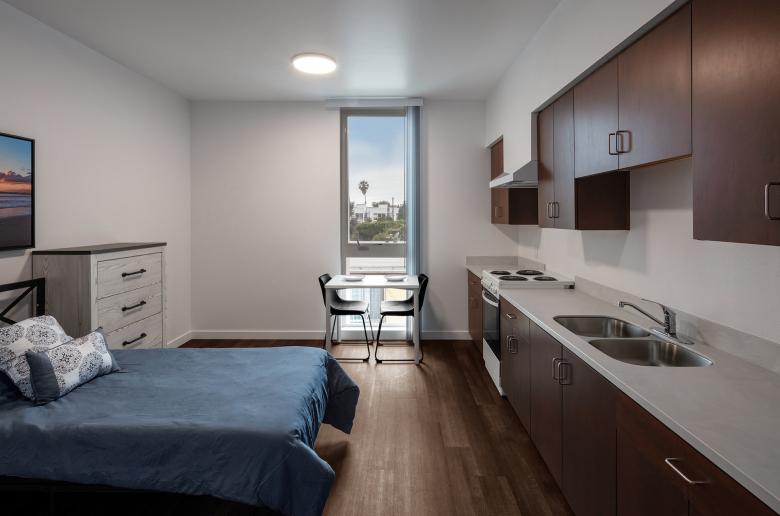 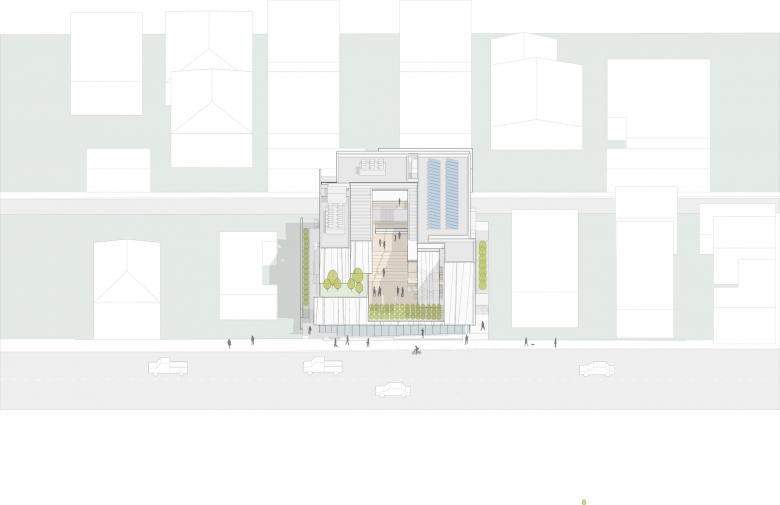 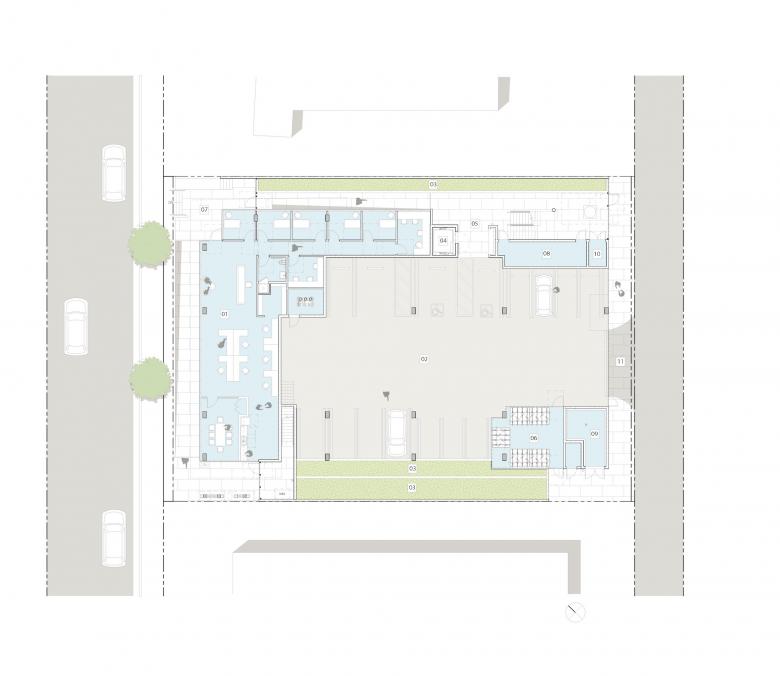 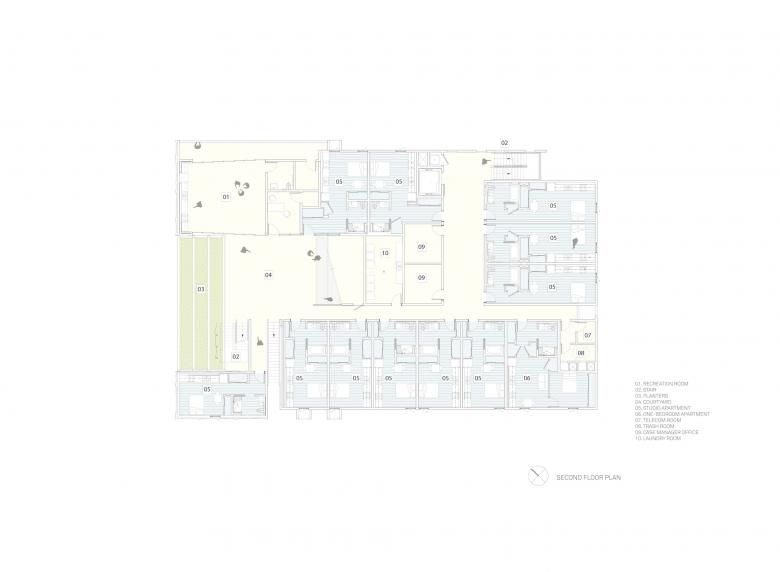 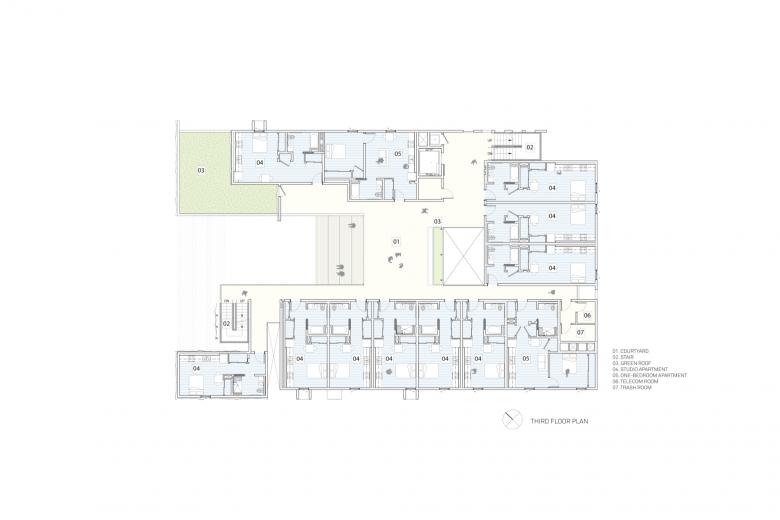 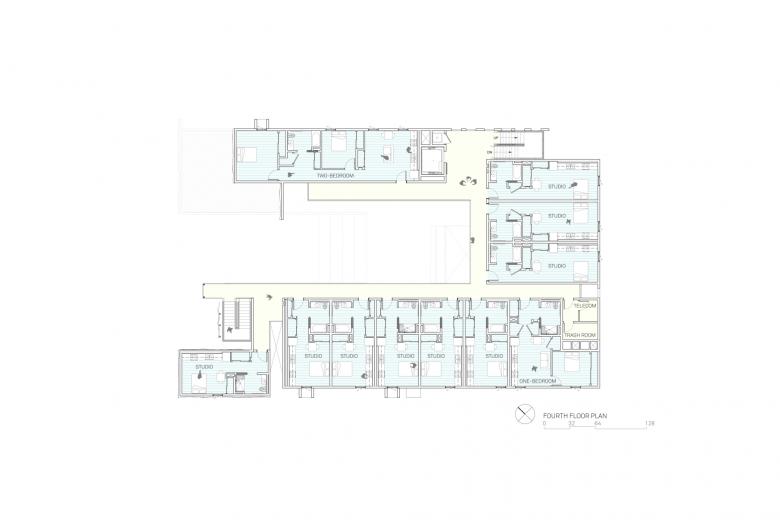 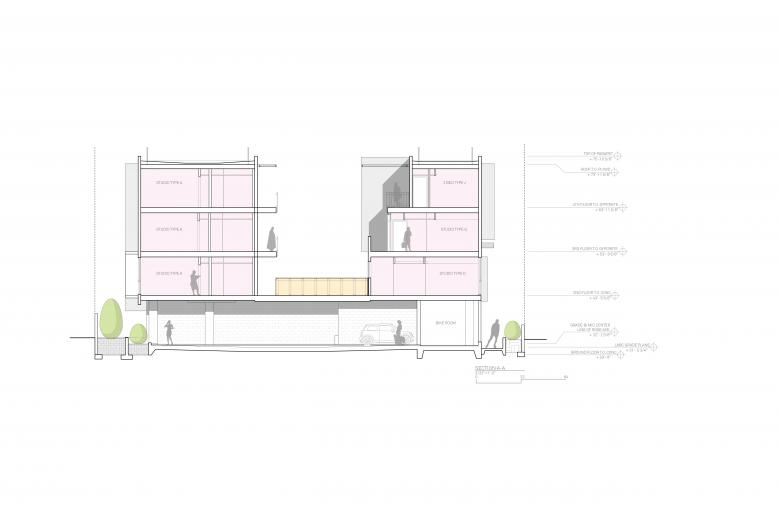 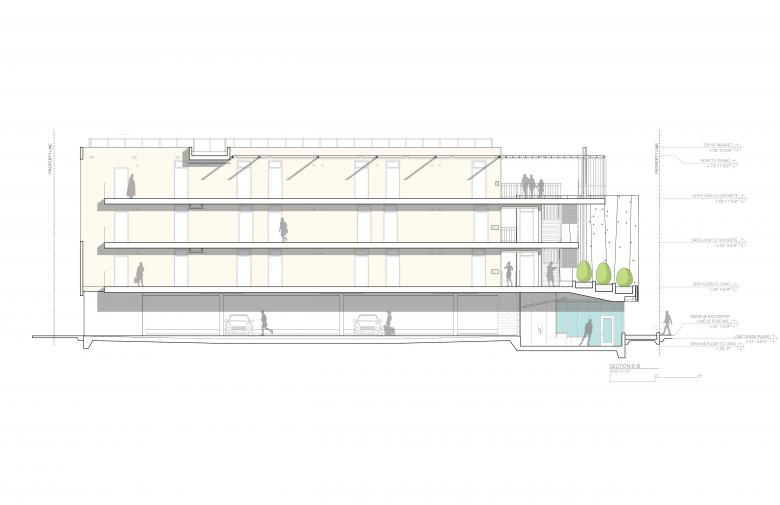 This new LEED Gold four-story 35-unit Rose mixed-use 100% affordable apartment structure for transitional aged youths. When kids “term out” as they say when they turn 18 years old and are forced to leave a youth facility, most wind up living on the street because there is no place for them to go. Rose Apartments provides a home to this young adult who would otherwise be living on the street. The building is located where no car is needed. It is situated directly across the street from Whole Foods, 7 Eleven, a laundromat, Lincoln Hardware and a host of other amenities and is just seven blocks from the beach, adjacent to the toney shops and restaurants on the eclectic Rose Avenue in Venice. Taking cues from the nearby Horatio Court, built in 1919 by Irving Gill, the building is designed around an elevated courtyard above ground level commercial space.

The courtyard typology has existed in Los Angeles for more than a hundred years. It promotes pedestrian-oriented neighborhoods as an alternative to sprawl, creating usable space in the center of the project, instead of unused, leftover space outside of the building volume. According to Ken Bernstein, director of preservation for the Los Angeles Conservancy, a lot of the courtyard apartments build prior to the 1950s, especially in Hollywood and West Hollywood, were part of a search for indigenous architecture,” he says, as much as an attempt to create neighborliness. More than any other multi-dwelling housing, courtyard apartments, “make you feel like you belong to a place.” For people living around the courtyard, the space provides a sense of safety and privacy; the courtyard is a quasi-public space that mediates between the home and the street.

Offering shelter and comfort, Rose Apartments eschews the typical neighborhood defensive apartment buildings with solid walls and fences in favor of a carved-out and raised central court, a beacon in the neighborhood that celebrates social space by de-emphasizing private space. Strategically placed windows, purposeful exterior circulation and units that wrap the outer-most edges, orient the 35 low-income apartments to social spaces that are spatially apart, yet visually connected to each other and the street below.

The courtyard is only one aspect of a successful design. Rose Apartments builds on this southern California housing typology, but unlike those earlier traditional buildings, it is more idiosyncratic - creating increased security, privacy and openness, while connecting to the greater community outside the building walls. By including affordable housing for transitional aged youths, it allowed the non-developer to take advantage of California State Assembly Bill AB763 for increased height and density, increasing the project density from an area average of 12.30/DU/A to more than 110 units/acre. This much needed affordable housing provides poor and disadvantaged populations housing in an affluent area of town where low-wage workers are critical but unable to afford to live. It also contributes to much needed affordable housing stock in short supply in Los Angeles.

Like many of the traditional courtyard structures before, the main exterior material at Rose Apartments is commonly used exterior cement plaster. However, at Rose walls are scalloped to give depth, relief and texture, an issue that affordable housing projects typically suffer. These walls also include surface applied sparkle grain that makes the facades shimmer as people pass by. Sunlight and bright lighting conditions make the façade go soft and silver in just a few seconds. It’s a quick-moving phenomenon that bends light and casts shadows depending on the time of day.

Other Projects by Brooks + Scarpa Architects