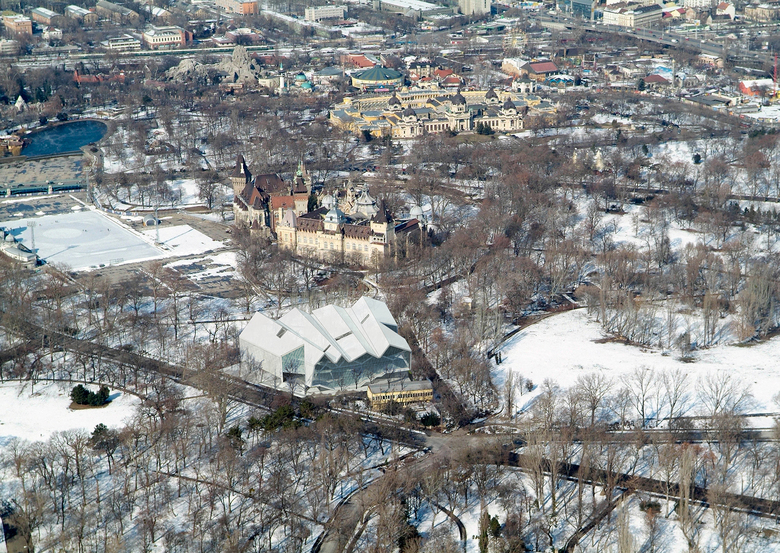 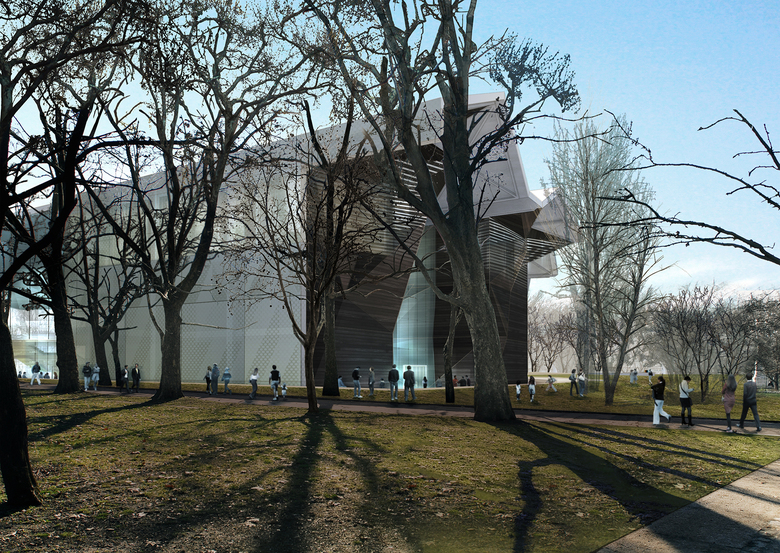 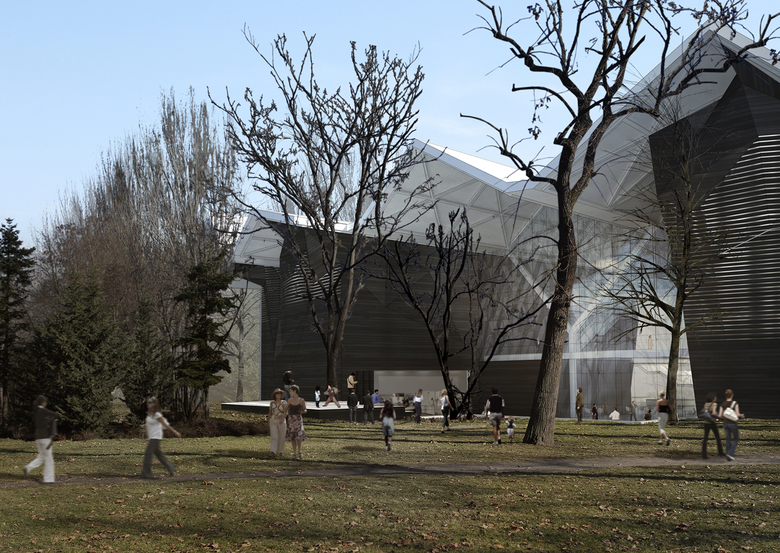 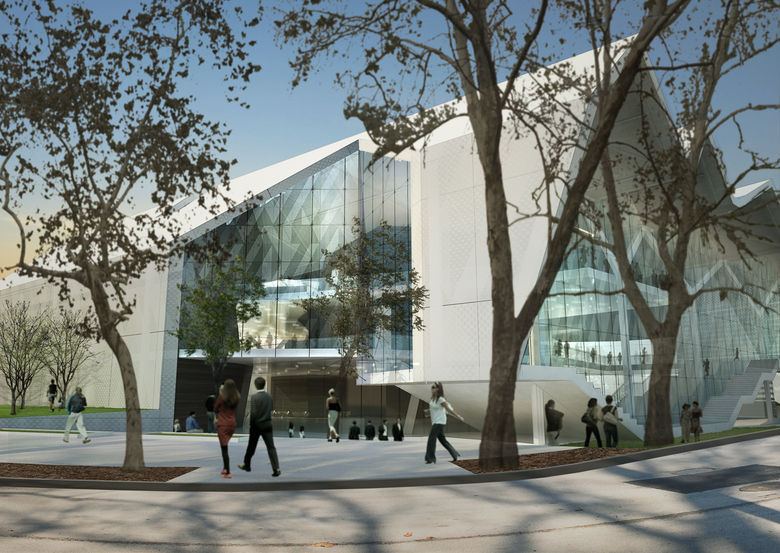 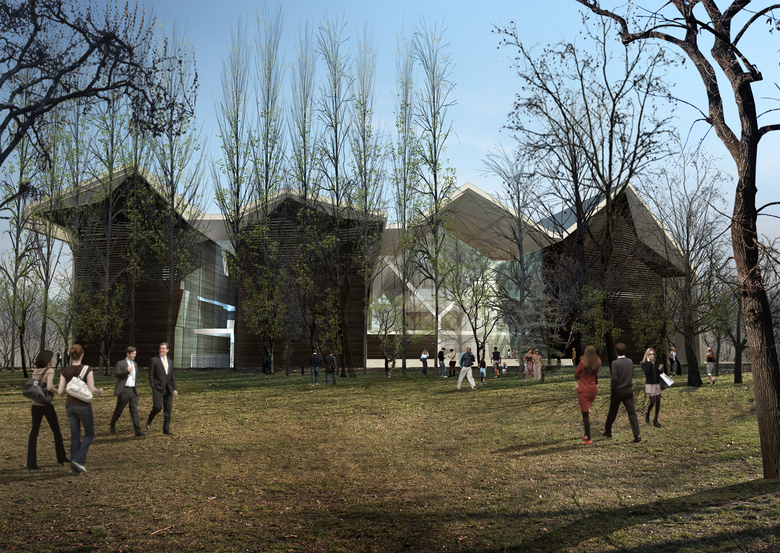 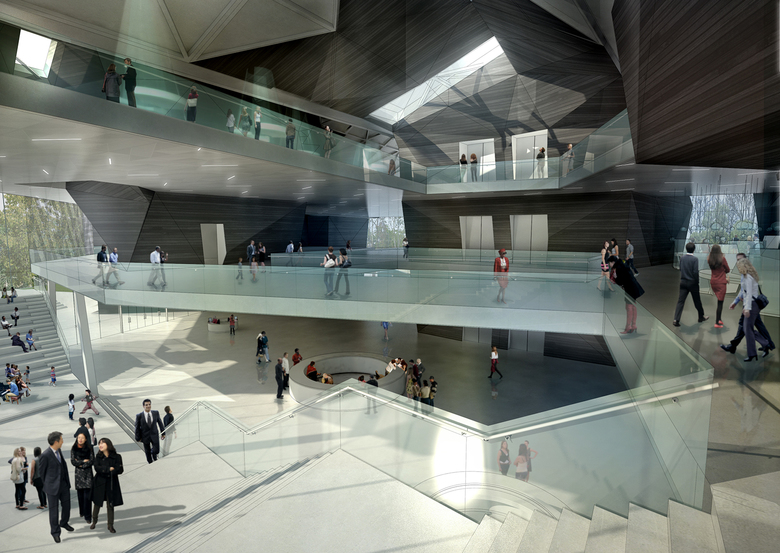 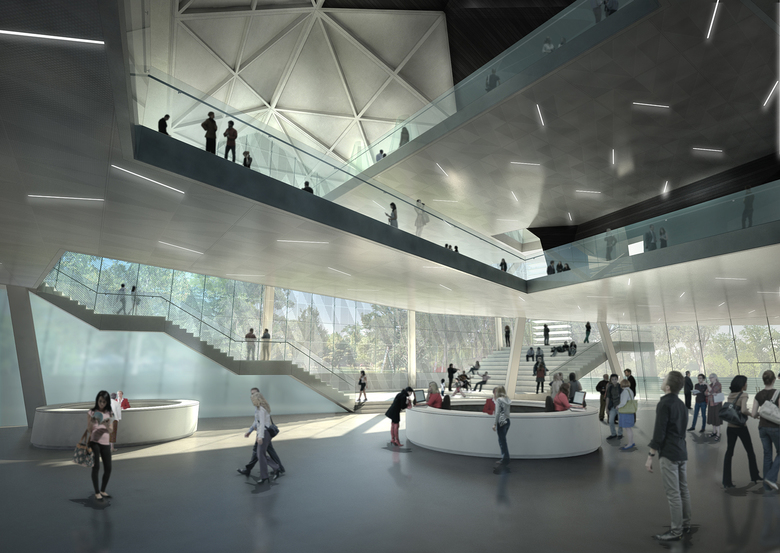 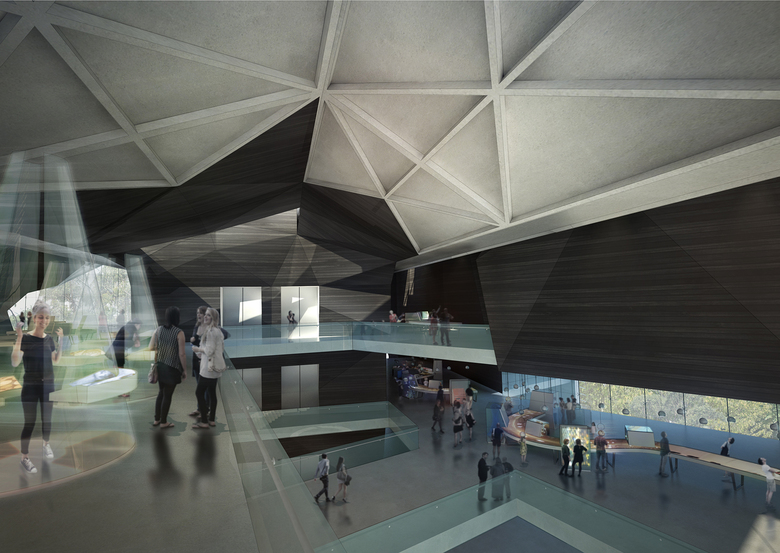 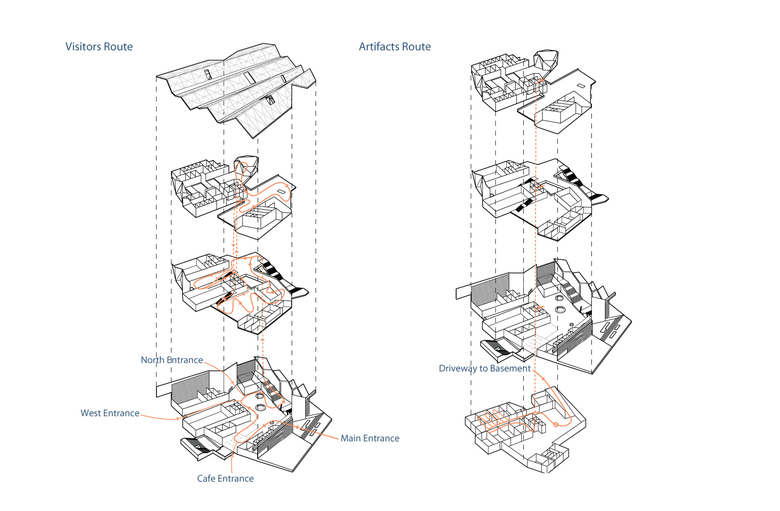 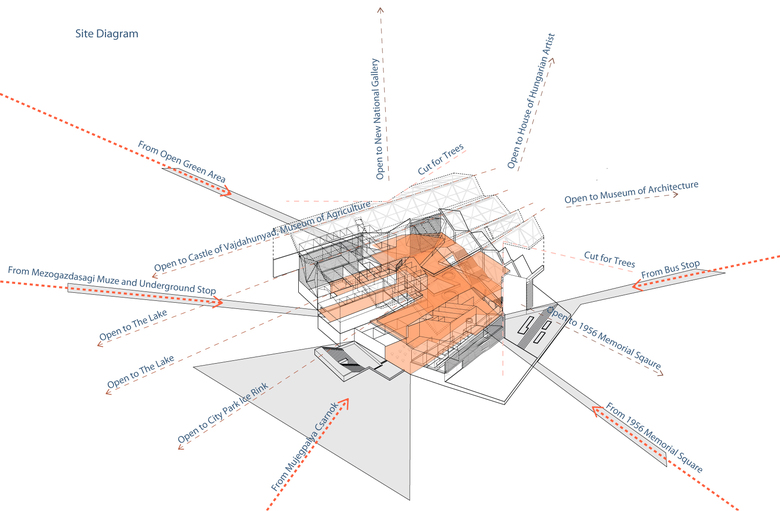 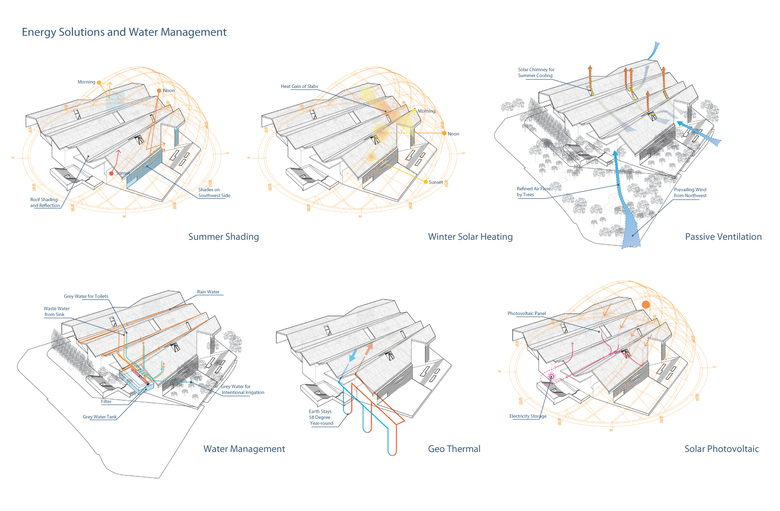 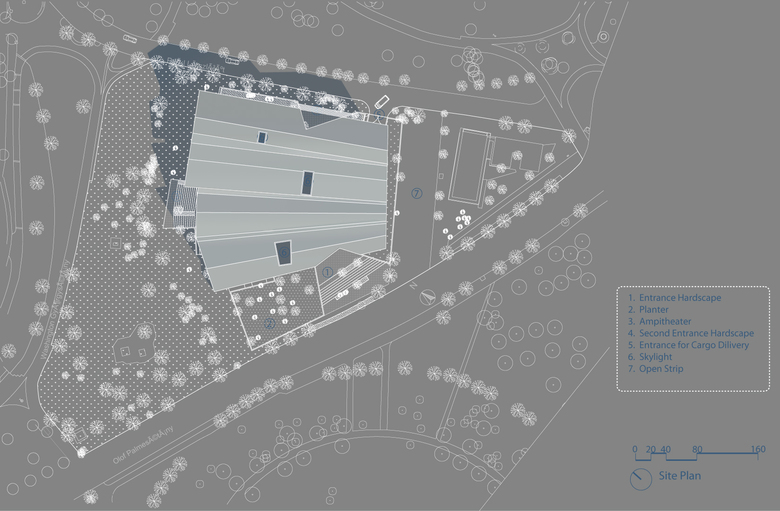 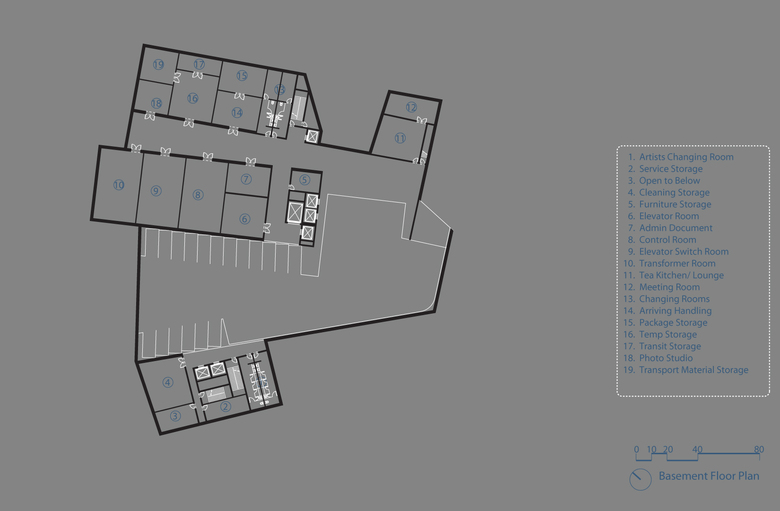 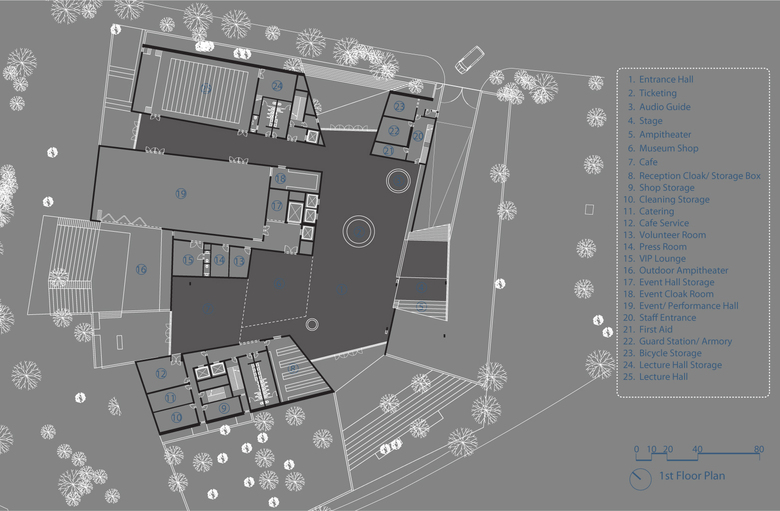 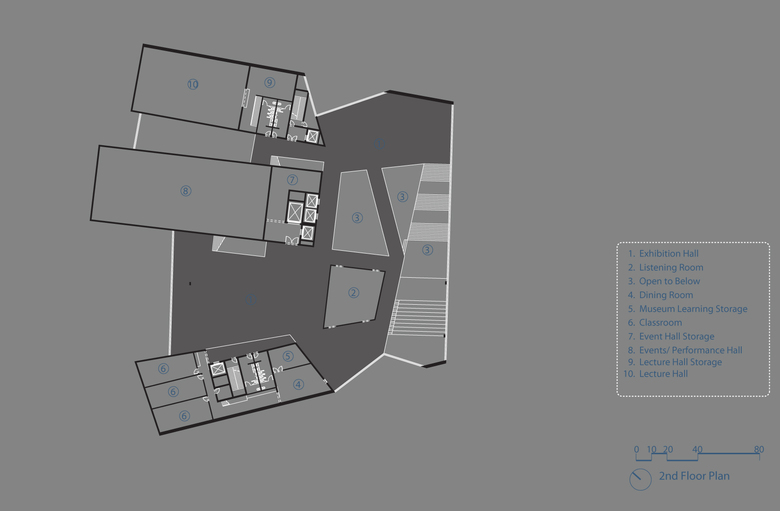 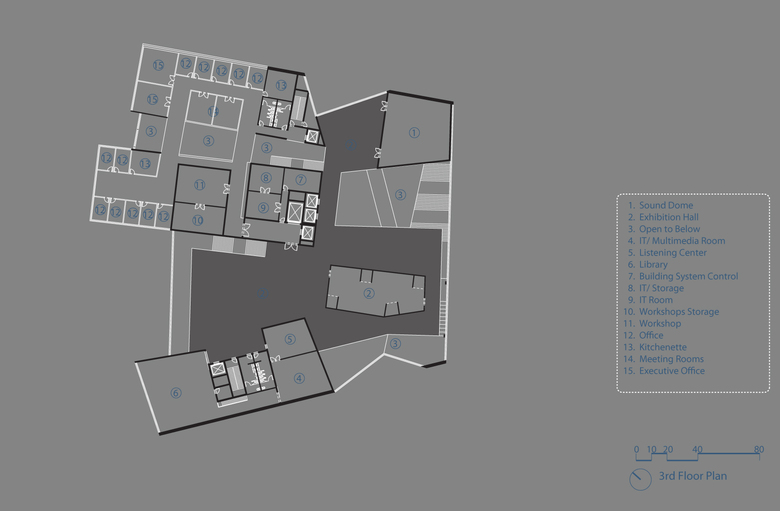 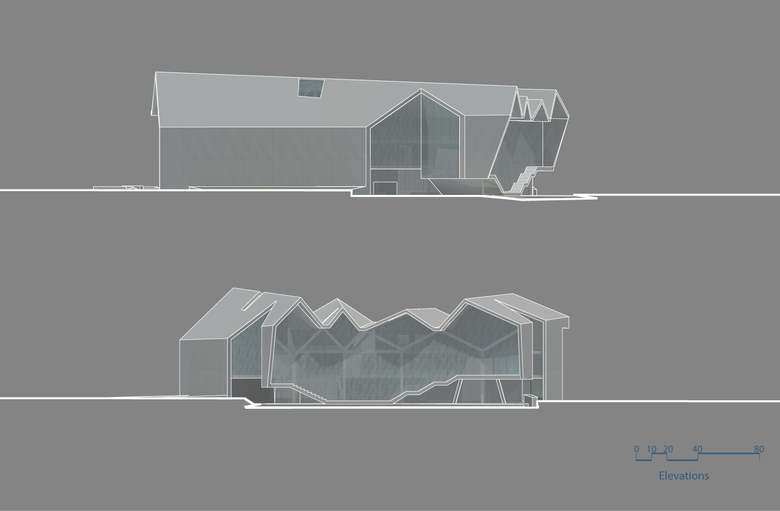 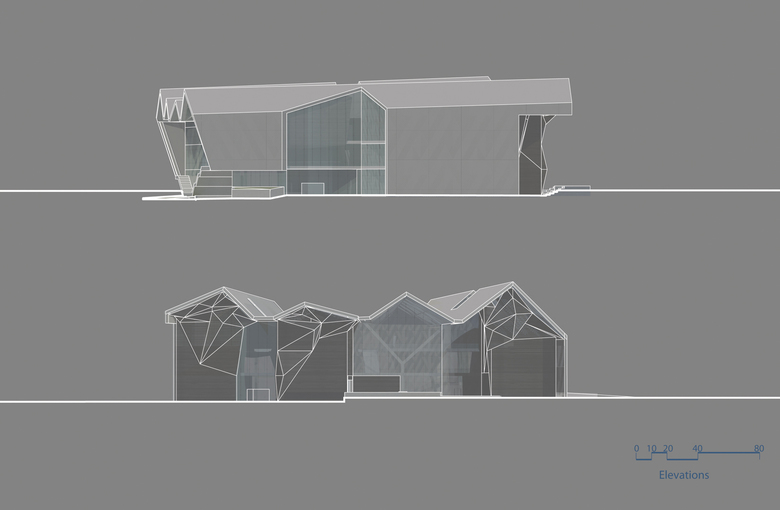 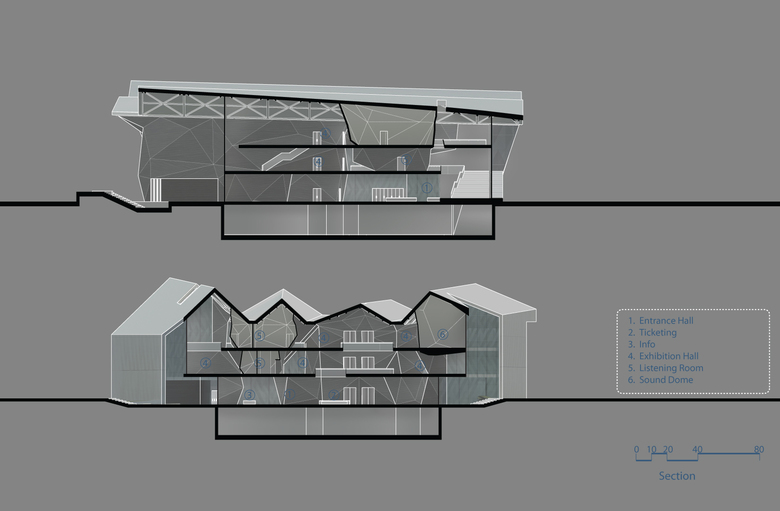 PROJECT VISION: The House of Hungarian Music is conceived as a tribute to the esteemed figures within the influential musical history of Hungary. In the spirit of Bela Bartok and Zola Kodaly, composers who collected and analyzed folk music and ultimately created the course of study known as ethnomusicology, HHM should serve as an open, accessible, and flexible venue bringing the vast contemporary and historical traditions to the people, as well as welcoming emerging musical experimentation into a complex Sonicscape. The HHM will create a space of immersion in music, yet open to the urban landscape of Budapest and in particular that of the City Park. Cementing the notion that music is conceived of and produced by the people (outside an institution) and in an iterative and evolutionary method, the design objective is that of the HHM as an instrument for composers, performers, educators and ethnomusicologists, and most importantly visitors to test, research, and experiment with a vast range ofcultural influences. This proposal therefore serves not only as an experiential and interactive symbol for music, but also as an iconic incubator open to the citizens of Budapest and welcoming various influences. In addition to the mission of the institution related to music and due to the project’s position within the City Park, the HHM has the unique responsibility to serve as a cultural destination for the City inhabitants and visitors. Therefore, the building’s relationship to the site is developed to encourage park activities to flow through the HHM and conversely music activities, to spill into the park. Significantly expanding the traditions of Hungarian contemporary architecture with subtle references to the past, HHM’s various architectural responses are deployed to produce uniquely performing public spaces around a building fully integrating it within its culture, context, and site.

ARCHITECTURAL CONCEPT: The architectural concept consists of an interest in two primary experiential objectives, a Measured Landscape and an Occupied Instrument. The first objective being the development of an architecture that acts as a tool to measure, survey, record, and ultimately engage the surrounding landscape – following the trajectory of Bartok and Kodaly’s field endeavors. The second objective is the creation of an immersive architectural experience - inspired by Mierswa & Kluska’s photographs of the interior of musical instruments. These two interests manifest themselves in HHM’s formal appearance, physical relationship to the landscape, and within the interior of the building.With the intention of creating an icon that can uniquely serve the diverse objectives and influences found within the Hungarian musical tradition and the project’s mission, as well as respond to the complexity of the City Park site, the HHM presents varied and evolving facades.References such as vernacular and civic architecture, traditional Hungarian musical instruments, contemporary acoustical geometries, sheet music, a grand piano, and an accordion are all evoked within the building. Depending upon the direction from which one approaches the site, a unique relationship, scale, form and texture is revealed. From the future promenade to the East, a singular building volume exists; from the West an unfolded and frayed edge opens and engages the interior of the HHM with the landscape.

Internally, the visual experience is an Ensemble of Elements. The HHM is composed of three wood clad towers that serve as an armature for the concrete, steel, and glass clad envelope and three interior tiers. The tessellated patterns found within the façade, the ceiling, and the tower walls both act as acoustical surfaces, while embodying the function of sound within HHM, reinforcing the idea of a building as an occupied instrument with the potential for rich sensory and aesthetic experiences. From the Lobby, occupants have sight and sound lines to the entirety of the ensemble, consisting of the Galleries, the Sound Dome, theprogram Towers, and the Theater Stair, as well as contribute to a robust internal and auditory experience. In addition to the internal spaces, the building also frames the park at all faces, screening roadways in order to reinforce the experience of a building situated within a landscape, creating various indoor and outdoor micro-environments that engage the park.

The Spatial Journey and access to the HHM begins with one of four entries: primary entry on Olof Palme Setany; a secondary on Paal Laszlo ut; and two tertiary entries from Washington Gyorgy setany and the adjacent green space. All entries lead directly to the lobby and various public components. To reinforce connections to the park and the notion that the HHM is ‘of’ the landscape, visitors are invited to descend into the building and occupy the ground floor – transforming the lobby into a dynamic community room. An intricate triple height interior landscape emerges from the center of the Lobby, occupied by the theater stair and flanked by the exhibition spaces. As one ascends the volume,spontaneous and planned cultural programming may be presented through the incorporation of flexible exhibition infrastructure.

Moving into the galleries, the occupant is exposed to the adjacent landscape. From this elevated vantage point within the HHM, visitors can begin to understand their position within the park. Views to the City Park Lake, the Vajdahunyad Castle, the Ice Skating Rink, and additional proposed park landmarks are framed. Spaces are organized into open “Visual” Galleries and closed sound-isolated “Sonic” Galleries, clad on the interior and exterior with an acoustically faceted and perforated wood skin or baffling that merges with the concrete roof. The“visual” galleries, open to natural light and park views, may be outfitted in a variety of configurations to accommodate various exhibition concepts.The ventilating skylights illuminating the galleries will include solar and black out shades to control light transmittance. The glazed facades contain a fritted pattern to diffuse and soften the light entering the spaces. In addition, the towers exposed and accessible from the galleries are clad in the same wood skin of the “sonic galleries”. These towers contain the educational/library functions, offices, auditoriums, and various service components. These spaces are organized in such a way as to provide ease and privacy of use within the various departments of the museum, essentially autonomous buildings within the museum, while also permitting the cross pollination of program function through the alteration of spatial aperture and access.

SITE RELATIONSHIPS: Two primary site relationships are explored in the HHM. The first relationship lies between the Cultural Access and the adjacency of the Lobby entrances to the proposed promenade connecting the Memorial of 1956 with the building of the New National Gallery. This edge includes an interior and exterior theater stair as a socially engaging response to the adjacent green space. The second relationship addresses the Nature Access through the café/exterior amphitheater and the event/lecture hall entrance directly into the park lawn. Here the building edge is blurred to engage the landscape through the creation of indoor/outdoor micro-climates that serve to draw occupants of the park into the HHM.

OPERATION AND TECHNOLOGY: To maximize the visual and physical experience of the building as it is integrated within the landscape, the HHM is situated atop a fully subterranean basement. Staff parking, all shipping/receiving, and related building service and artifact handling is situated with direct access through three Vertical Cores within the program towers. The South tower contains direct vertical access between building service programs at the basement and ground levels and educational programs at the second and third levels. The central tower is dedicated to the event hall and all exhibition artifact and furniture movement, through its freight elevator; the North tower accesses the HHM’s musicology staff programs. The vertical program divisions within the overall building plan allow for various components of the HHM to be used independently, simultaneously, and or collectively without negatively impacting other programming. In addition to the flexible building planning strategies, various void spaces exist throughout the building to accommodate the modification of infrastructure in the short term or the long term as technology evolves. Ceiling systems are fitted with removable perforated panels that permit the structural attachment of partition systems, hanging elements, electrical, lighting, and AV connections to be easily added and reconfigured over the life of the museum. In addition, acoustical wall systems can be removed to access mechanical space and upgrade systems as required. The operations strategy proposes the integration of common and advanced technologies in the management of the HHM.

SUPPORTING STRUCTURE: The notion of HHM as an architectural instrument deployed to visually survey the City Park, and physically underscore the experience of the culture of music, is reinforced by its structure. The building mass consists of three cast-in-place Concrete Armatures over a subterranean basement. The concrete rib slabs and roof system, the Spatial Trays, are cantilevered from the three supporting towers with additional pre-cast concrete columnar supports as required around the perimeter. Fly-ash concrete was selected to accommodate the thermal mass necessary to support the environmental intentions of sustainable solutions. The column-free space within the galleries provides multiple exhibition possibilities at a curatorial level in conjunction with the accommodation of evolving technology within theaccessibleceiling chases of the rib slab.

SUSTAINABILITY: The building embodies and displays its sustainable character through the geometry, forms and site relationships established. Through the implementation of the most sustainable Active Technology, such as advanced photo- voltaic panels installed on the folded roofs, a system of geothermal wells, super-insulated construction, a gray water and rain water recycling system, and integrated active solar shades, the HHM has the potential to be a zero energy building. In addition, Passive Technology will be employed, to harness natural light, substantial thermal mass, thermal chimneys, and ventilating prevailing winds. While the roof is the visual icon and primary interior spatial device of the HHM, it also serves a critical role in the performance of the building. The roof orientation protects the façade from the summer sun and admits the low winter sun. Additionally,the roof is used to capture and direct prevailing breezes, resulting in the cooling of the building. The iconic roofs not only contribute to the passive solar control; they channel water toward a subterranean storage system ultimately reused on site. The functional expression of the building’s form is intended to reinforce the sustainable strategies in use.