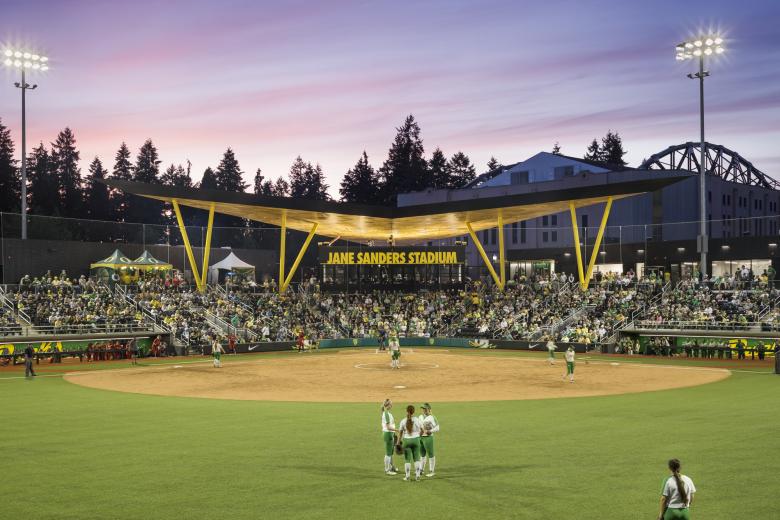 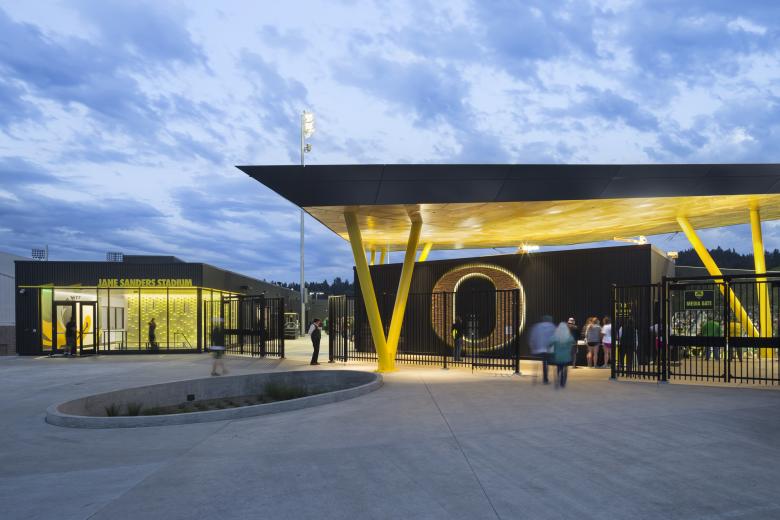 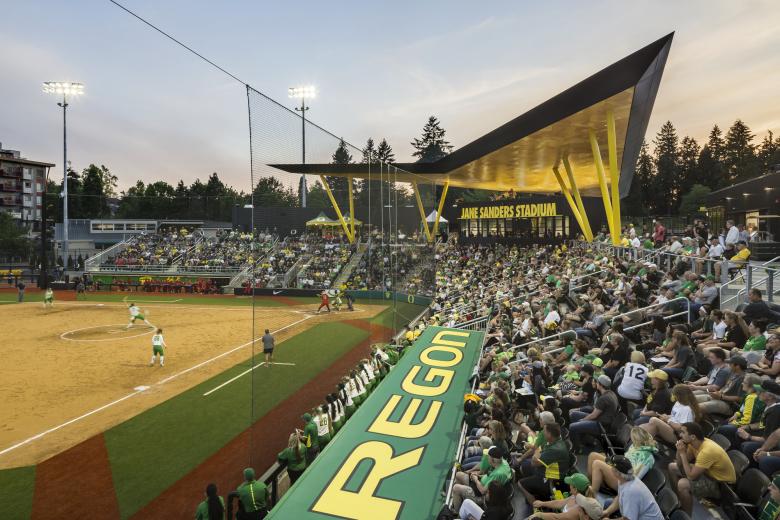 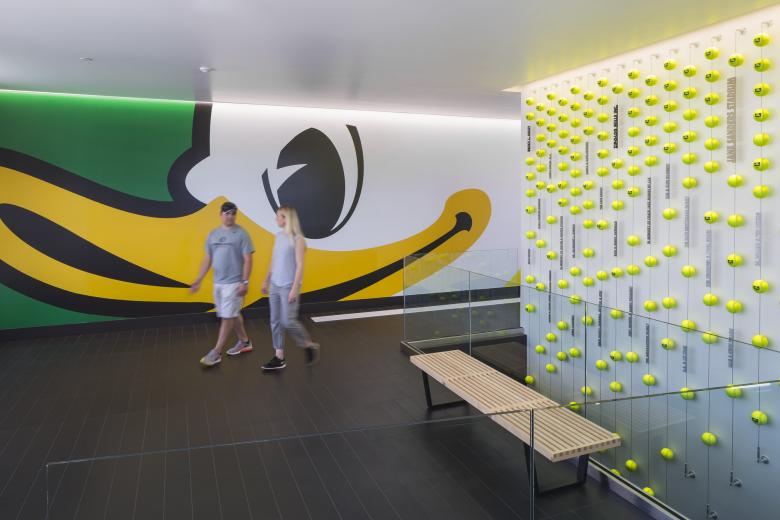 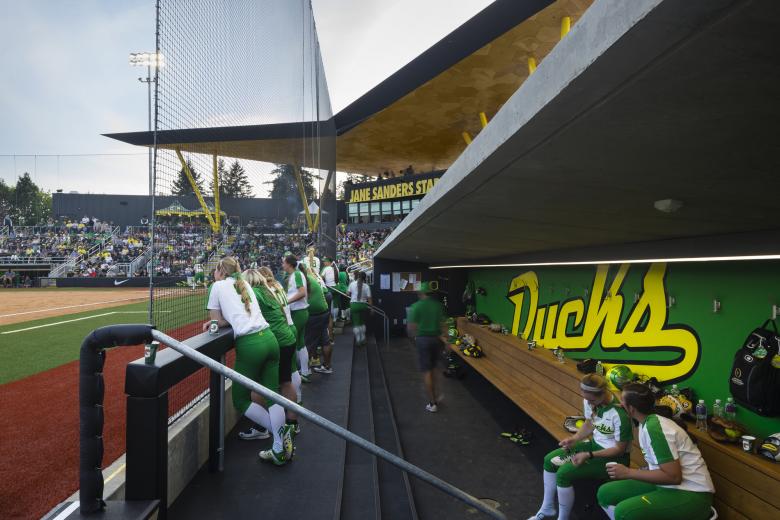 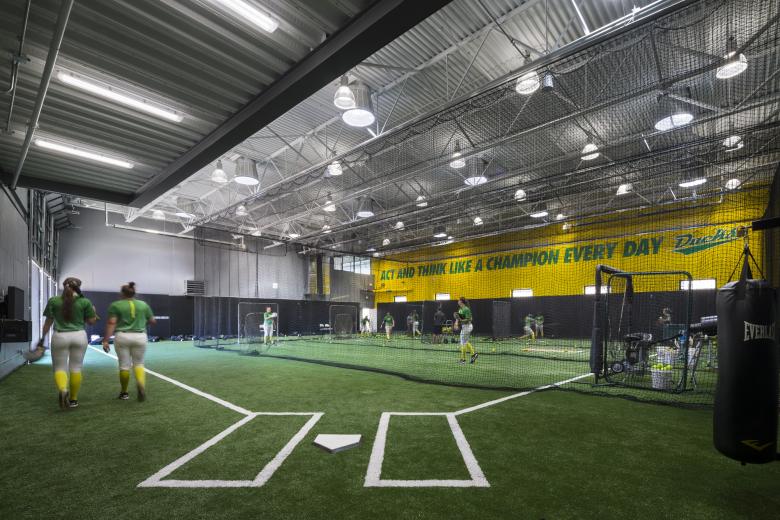 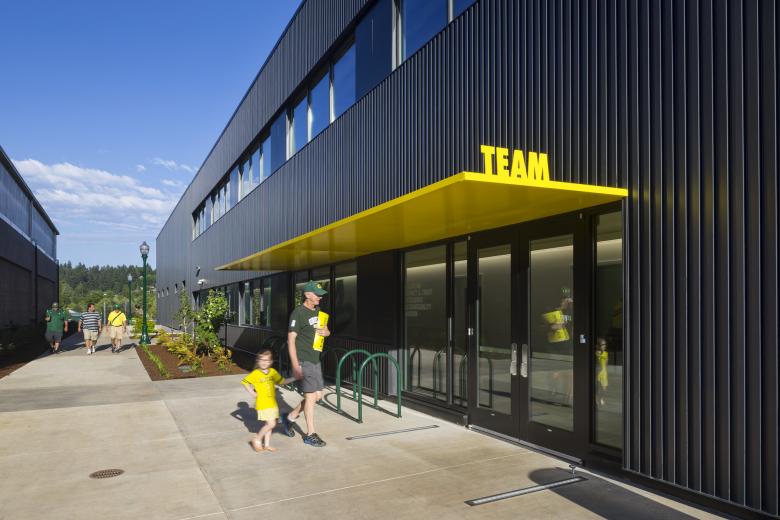 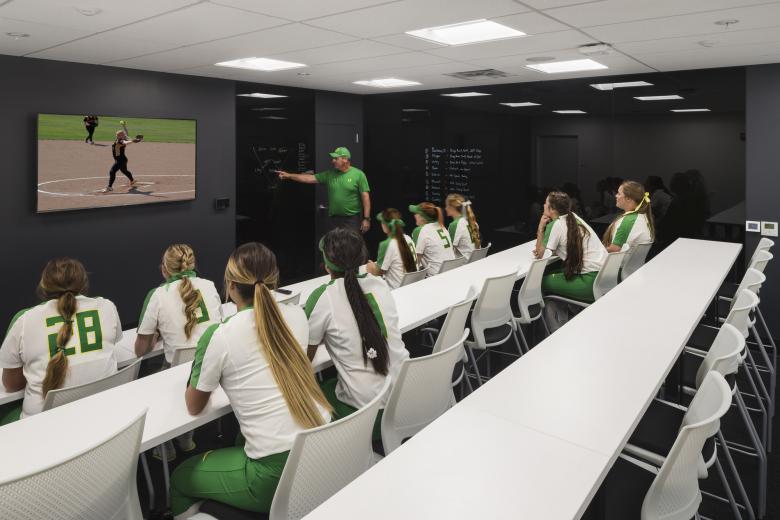 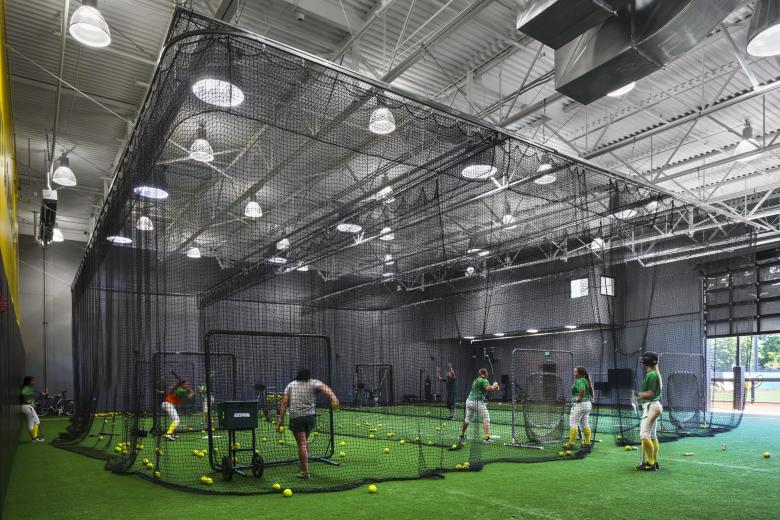 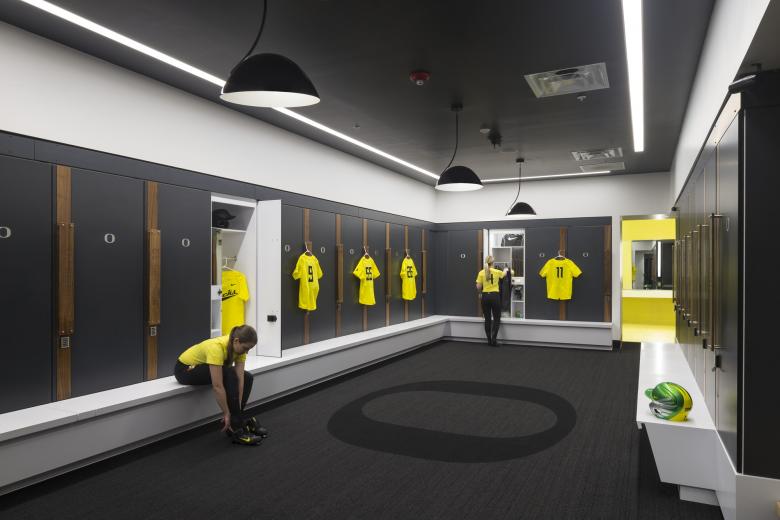 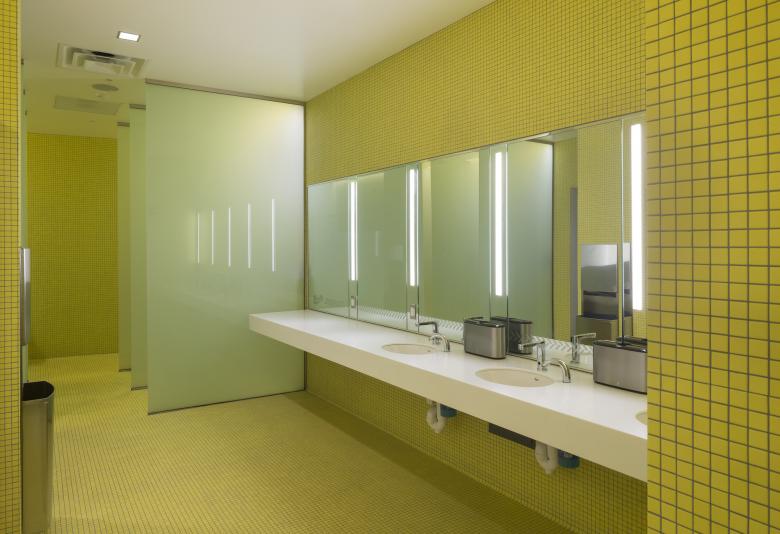 Today, Jane Sanders Stadium is home to one of the most innovative and respected athletic programs in the country, the five-time Pac-12 Conference championship Oregon Ducks Softball team. Made possible by a gift bestowed by lumber industry entrepreneur and UO alumni Robert Sanders, class of 1951, and named in honor of his late wife, Jane, class of 1950 and an avid supporter of Ducks softball, this state-of-the-art 1,500 fixed-seat outdoor stadium evokes power and strength. Its design befits of the stature of the university's softball program and the devotion of its fan base.

Indeed, the highest priorities of the stadium's design included fostering UO's exceptional relationship between student-athletes and their fans, making the rigorous day-to-day routines of student-athletes a seamless experience, and enhancing the fabric of the University of Oregon campus.

The Ducks thrive on the energy they share with their fans. To cultivate their camaraderie, the stadium bowl's seating extends to the field level, and program components, such as suites and practice facilities, more directly connect to the field via sightlines and literal proximity. This design also maximizes seat count and space for the team, demonstrating not only the ethos of the UO brand, but cost-efficiency.

The project—comprised of two other facilities adjacent to the stadium, a Team Building and Softball Performance Center—makes the routine of training, practice, and game day for student-athletes more seamless by removing the distance between that routine's daily destinations. The design team also successfully incorporated new pedestrian connections while enhancing those that have existed between the university campus and greater Eugene, Ore.

Brand Integration
This stadium, including the iconic canopy that soars high above the concourse and seating bowl, has become synonymous with Oregon softball and its innovative brand of play. As the primary element of arrival, the elegant and graceful wing-shaped canopy embraces the field, and custom plywood panels—cut into the shape of home plates—clad its soffit. Assembled in a dynamic pattern based on a module designed to minimize waste during fabrication, this cladding subtly references UO alum and the project's primary donor, lumber industry leader Robert Sanders.

Key UO themes of stealth and feathers; the Sanders Family's tie to the lumber industry; and the motif of the home plate influence the design and appear in the stadium's form and materials. The outcome visually articulates the UO softball story of innovation and achievement, ducks in flight, the Sanders Family, fans' enthusiasm and devotion, and the virtue of sport.

Consolidating Team Facilities
Jane Sanders Stadium consolidates three integral facilities — stadium, team building, player development building — in one location. Before, these facilities were located in disparate campus locations. Previously, the team practiced in a shared facility, received medical support in another location, and played games at a third location. Now, the planning of critical proximities and integration among the facilities more fully supports athlete growth. Today, student-athletes train in a state-of-the-art facility, complete with computer-aided batting technique analysis and a room for reviewing and discussing video footage of previous games.

Sustainable Design
The Stadium was designed to achieve LEED Gold certification, a unique accomplishment in the world of sports facilities. The building also meets UO’s aggressive Oregon Model for Sustainable Development, with an energy reduction of 35% over Oregon Energy Code. Furthermore, the building reduces water usage by 37% with low-flow fixtures and irrigation savings measures. Turf was chosen for the outfield for its low irrigation and maintenance requirements. Prismatic skylights daylight the adjacent Softball Performance Center, conserving energy and emulating the outdoor conditions of the field. Built from a prefab system, the stadium bowl features components with a high recycled content that are easily maintained, and that can be deconstructed and recycled again at the end of their useful life.